The English are in trouble again as I venture into the water to discover another title in the Dragons & Dinosaurs chapter of DK Canada’s Monsters in the Movies.

This time all of our atomic testing has caused a mass of radioactive waste to wash ashore near a small English village, and that’s only the beginning. The radiation rouses a long dormant dinosaur that because of the radiation, can now project electricity, and radioactive beams!!

It wreaks havoc on the small village before setting its sights on London. But when the cast learn that conventional weaponry, say like anything the army or air force plans to use, the creature’s demise will cause a radioactive wave that will contaminate the entire United Kingdom, and perhaps beyond!

What can the military or the scientists do? How will they be able to stop the Behemoth?

The creature itself is presented with stop-motion animation, and is a fun creation. In fact, there is a sense of fun to the whole adventure as the first part of the film delves into ‘science’ as a team of researchers try to ascertain what is happening. 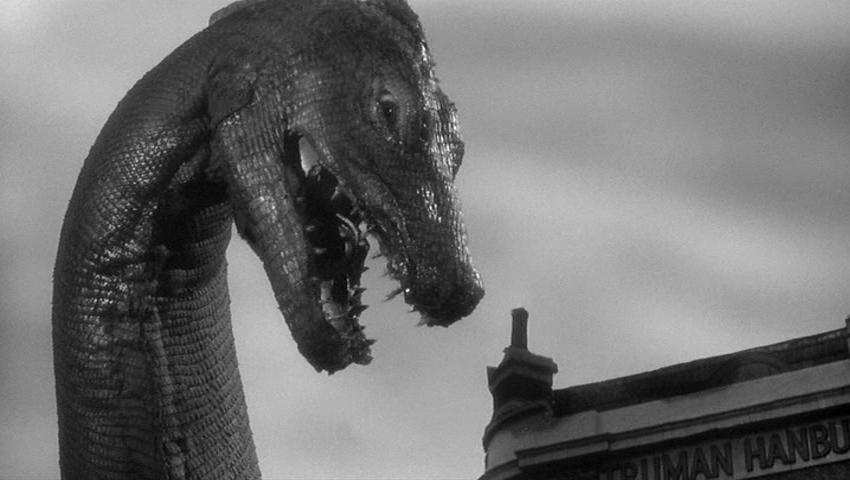 But that is all just prelude to things really getting underway when the Behemoth swims ashore!

Will the British figure out a way to stop the prehistoric creature and save all of England? Will there be tea involved?

The film is a little short, and not quite as much of a destructive romp as it should be, but it is pretty fun, and the stop-motion animation that brings the dinosaur to life are pretty good, and the model work he interacts with is solid as well.

But in the end, it’s nowhere near as enjoyable as a Godzilla movie, and it is very British.

Still, seeing dinosaurs and such stomp across the screen, or swimming up the Thames is always pretty cool, so I was more than happy to sit through this one, and revel in the creature brought to life by film magic.

In fact, so many special effects creators love this film, one of them owns the original puppet, Dennis Muren.

The dinosaurs and dragons featured in this chapter have been a lot of fun to encounter, and I can’t recommend them enough, even when they are layered in cheese. So if that sounds like your thing, make sure you pick up a copy of DK Books’ Monsters in the Movies and find something monstrous to watch tonight! 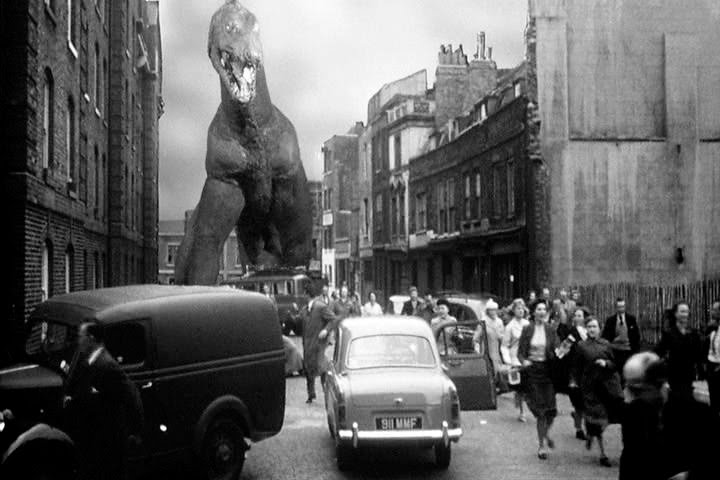