The next title from the Dragons & Dinosaurs chapter in DK Canada’s Monsters in the Movies book is one I remember from my youth, not because I saw, but because I didn’t but the poster fascinated me. Of course, if the special effects were on par with the artwork of the poster this would have freaked me out a lot as a kid. Instead, I now get to enjoy it for the creature feature throwback the film is, and revel in the performances of David Carradine, and Micheal Moriarty.

And not just Carradine and Moriarty, the film also featured Richard Roundtree (!) and Candy Clark. How was this film not bigger when it came out? Of course, then you remember it was 1982, and this film was completely out of place, and a little too low-budgety looking when compared to the other fare coming out that year.

Now, however, this is just good fun!

Q is a giant flying serpent, supposedly the incarnation of the Aztec god, Quetzacoatl, and one of the subplots of the film centres on the being’s history and it’s possible resurrection in modern-day New York. So buckle up, because this is gonna be a ride… 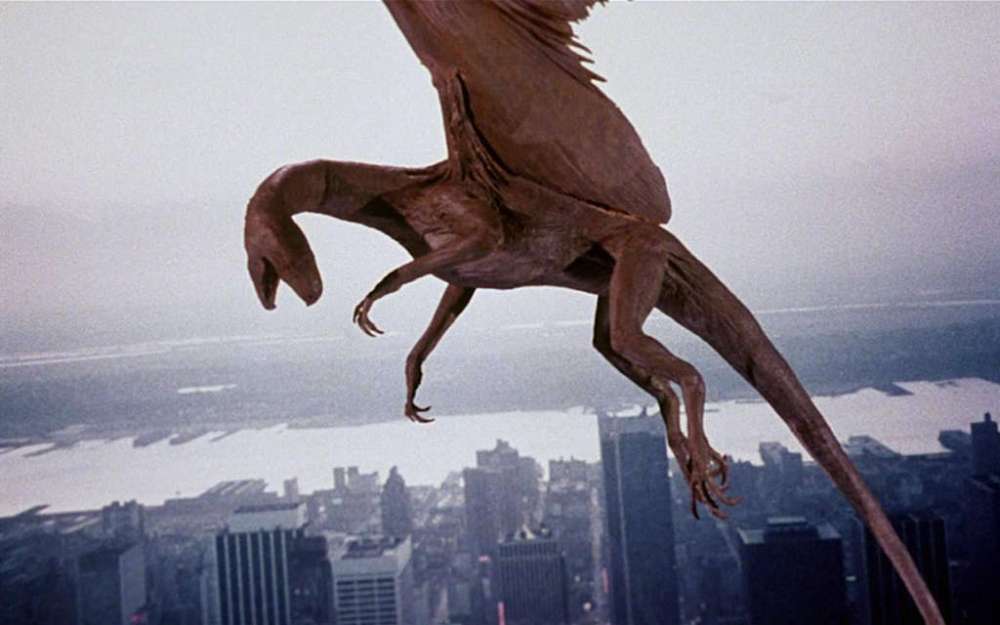 Moriarty is on a whole different level in this film and is just a hoot to watch as the small-time crook, Quinn, while Roundtree and Carradine play cops who find themselves involved in a strange case that gets weirder, from sacrificial murders to a strange beast flying and hunting over New York.

The creature effects, most are stop-motion, are solid, but aren’t really combined very well with the film itself, so instead of looking really sharp, it ends up looking goofy and cheap, and consequently, renders this film a little more comedic than intended and has cult classic written all over it.

Cohen wrote (in six days), produced and directed this film, and he tries his damnedest to make the most of his pretty top-drawer leading cast, locations, and the effects he can afford.

There’s also a sense of improvisation (not always in a good way) to the shoot, and this film with a few tweaks would have been right at home during the 50s and 60s when monster movies truly had a heyday.

And Quinn is determined to make a mint off of the creature, as he seems to be the only one who knows where it is, so he basically holds the city for ransom, but of course things don’t work out the way he plans, and things backfire every which way.

But all of that seems secondary to the decapitations, and munching that the big flying bird is up to – there’s a nice level of 80s gore to the film, but if that’s not really your bag, pick up a copy of DK Books’ Monsters in the Movies, and find something suitably monstrous to meet your tastes.