The final episode of Voyager, Endgame, is a feature length story that was written by Kenneth Biller and Robert Doherty from a story that Biller developed with Rick Berman and Brannon Braga.

The final mission of the starship U.S.S. Voyager aired on 23 May, 2001 and was determined to wrap everything up in its runtime.

We begin in the Voyager’s future, with Admiral Janeway (Kate Mulgrew) deciding to alter the past to get her crew back to the Alpha Quadrant sooner than she originally did. But that is going to cause all manner of problems.

Not to mention violating the Temporal Prime Directive.

And all of this catches the attention of the Borg, and the Borg Queen (Alice Krige returning to the role).

We start in the future, as the crew comes together for an anniversary gathering, and we see how they have grown, and that the Doctor (Robert Picardo) has finally selected a name… Joe. And we learn that in the original timeline it took the ship twenty three years to get home.

Through the course of the episode the writers make sure that everybody gets a moment (including Dwight Schultz returning as Barclay), both in the future and in the Voyager’s present.

In the starship’s presence, Tom (Robert Duncan McNeill) and Torres (Roxann Dawson) are close to delivering their baby, Tuvok (Tim Russ) shows the first signs of a disease that will affect him in the future, and Chakotay (Robert Beltran) and Seven of Nine (Jeri Ryan) are pursuing a romantic relationship (this feels a little off and weird).

Admiral Janeway with a little temporal mumbo jumbo returns to the past (the Voyager’s present) at a key moment. They’ve discovered a possible wormhole, but it is in the middle of a Borg-controlled nebula, and problems are going to be coming fast and furious as the Borg work to stop the Voyager, and the Janeway’s face off over ethics and choices.

Decisions and sacrifices will be made before the end of the story, but will it end with the Voyager home?

Of course it will. There will be payoffs for character arcs, Janeway from the future is the key to stopping the Borg Queen, and it’s a great way to close out the series. And just like that seven seasons have come to a close, and we say goodbye to this crew.

Watching it as a whole like this, I really enjoyed this series, just as much as the other series. I love my Trek, and watching them cohesively like this is so enjoyable.

Burt the Human Adventure isn’t over yet, the wonder and journey continues as I dig into the first prequel series on Thursday, Star Trek: Enterprise, both shows are available in sets, The Complete Series, now available from Paramount Canada. 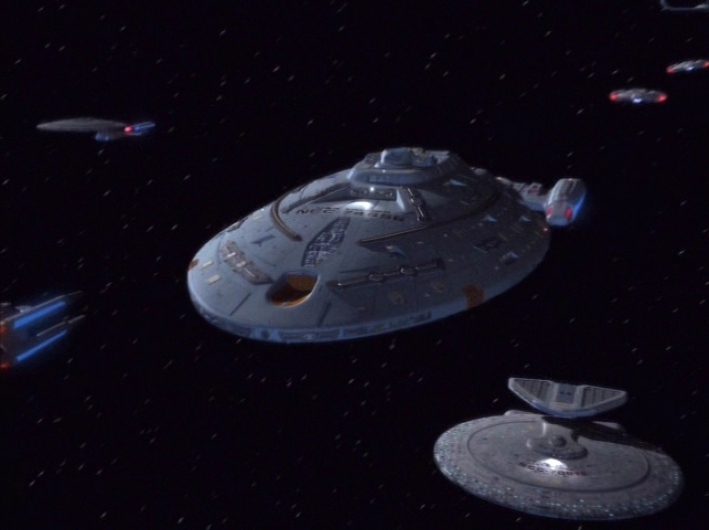