No matter the themes, social commentary or underpinnings we wish to assign the Skywalker Saga, culminating with the release of Episode IX: The Rise of Skywalker, Star Wars has always been a space age fairy tale – there are princesses (turned general), knights (both good and bad), evil lords, fortresses, unlikely allies, scoundrels, heroes, villains, battles and magic.

So by definition, there must be a happy ending to the saga, and Abrams, returning as director after his turn on Force Awakens, also adds to the story, that may end up being as divisive as the previous film, The Last Jedi. Episode VIII proved to be a unique film, splitting fandom, seemingly, right down the middle, in terms of liking or hating the film.

Consequently, Disney and Abrams do a little bit of course correcting back to the middle of the road with their escapist fare, and it proves to be a little too safe. It’s still a good popcorn movie, and it is undeniably, to me, Star Wars, but those who may have liked the way the previous story shook up expectations may feel that this one is just a little too comfortable.

That being said, I enjoyed the story, and loved specific moments, and this story is very much an adventure, it’s a romp, and finally we get to see our three main characters, Rey (Daisy Ridley), Finn (John Boyega) and Poe (Oscar Isaac) on the screen together, and they are joined by a number of familiar faces, and some new ones as they confront Kylo Ren (Adam Driver) and the plans of the First Order.

It’s not a big secret that the Emperor (Ian McDiarmid) is back, it’s right there in the opening crawl and that first teaser, so you find out as soon as the story begins, and for the most part, Abrams story makes it a believable return, and makes it something that resonates through the entire saga.

And speaking of, there are a few cameos, and two of them delighted me to no end, one of them bringing tears to my eyes. In fact there are a number of moments that made my eyes damp, but a number of them that pleased my inner geek as this film ties in not only the films, but also The Clone Wars and Rebels television series if you know where to look and listen for them.

And of course, there is the footage of Carrie Fisher, which, shot for The Force Awakens, is worked into this film, and makes events in this episode all the more poignant. There are layers going on here that just aren’t tied to the characters of the movies, we, and the characters have to deliver a final goodbye to Leia, and it has to be in service to the story, and it has to be heartfelt, and it has to mean something. 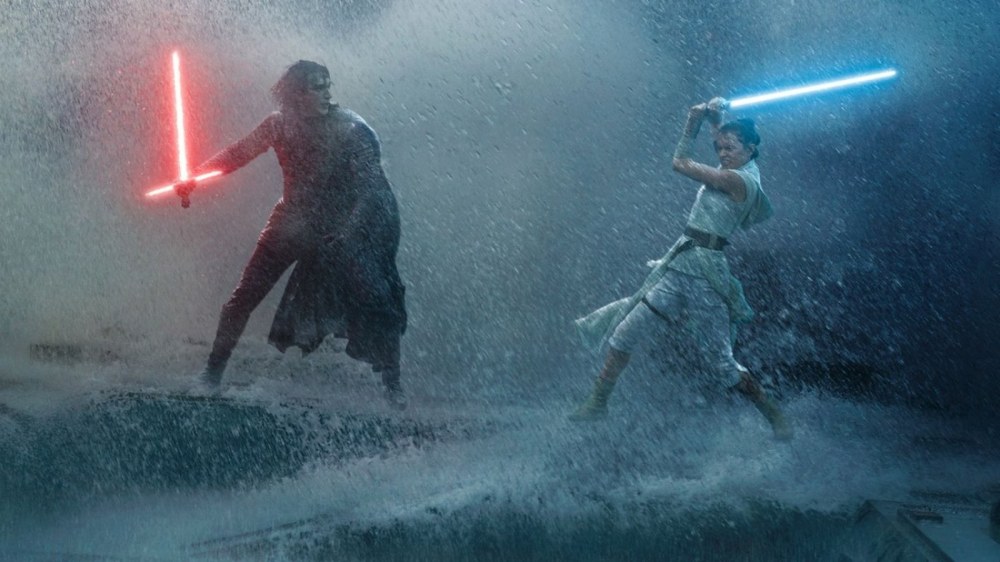 And it made me cry.

Composer John Williams who has been with the saga from the beginning gets to recall themes and motifs from the entire series, bundling them all up here in one final package. It’s wonderful to hear those themes again, and see them play out as they should against these galactic images, but it also puts me in mind of everything that has gone before.

1977 was a long time ago. Things have changed, including the style and speed with which we tell stories. There are differences in visual effects, and while the New Trilogy is faithful to that which has gone before, it’s a whole different ballgame, and sometimes it feels so big…

… and then you get a glimpse of an old friend, or ship, or some other touchstone that has been with us for decades, and you realise that no matter how much it has changed. We are home. We may not like all the moments throughout the story, but the Skywalker Saga is now complete and it goes out on a story that left me content; joyous for what I’d experienced, and mourning that it was over – there will never now be a first time for the Skywalker story for me.

That being said, there are things hinted at that happened between episodes, not just The Last Jedi and The Rise of Skywalker, but also The Return of the Jedi and The Force Awakens, and I hope we get comic or novels filling them out, because one of them sounds really awesome.

And that’s the other amazing thing. The galaxy feels big now because it is big now. It doesn’t just include the films, it includes the television shows, the comics, the books, all of it tying together to weave this incredible tapestry, that may have battles, romance, political intrigue, but in the end, is still escapist fare.

Is still a fairy tale.

So, when you settle in for this one, leave behind your scepticism, your day to day snide, and remember what it was like when you were first introduced to Star Wars and go on one last adventure with your friends in a galaxy far, far away.