Sooner or later a John Landis film had to pop up in DK Canada’s Monsters in the Movies book. Despite the fact that the famed director wrote it, he would be remiss if he didn’t include his own films in this highly enjoyable book.

Consequently I happily sank my fangs into this vampire tale that stars Anne Parillaud, Anthony LaPaglia, and Robert Loggia.

Parillaud plays the vampire Marie, who hunts down and feeds off criminals, LaPaglia is Joe Gennaro, a cop working on a mob case, and Loggia is mob boss Sal The Shark. Unfortunately, when she attacks Sallie, she doesn’t get to finish him off, and he turns, and from there he begins to create a whole new mob, an undead one, that Marie and Joe, who develop a bit of a romantic attachment to one another, have to stop.

There’s a bit of a crappy voice-over narration by Parillaud that could have been avoided with a few extra shots, or even just left out entirely to let the audience discover the character without being led by the nose.

Parillaud and LaPaglia never seem completely comfortable in the film, and the contact lenses that Parillaud use don’t always seem to line up properly giving her eyes a skewed appearance. The only person who seems to be really enjoying themselves is Loggia.

Robert Loggia seems to delight in chewing scenery and co-stars in his vampire form, and is actually a lot of fun to watch in this film. He totally gives himself over to the role, and just goes with it, getting Landis’ sense of humor and style, something that the rest of the leading cast seems to have problems with.

The entire film is a little off-balance, and never quit hits its stride, and that rests mainly on the two leads, both of them are very cardboard in their performances, and never seem to quite get into the film. Parillaud may have had some problems with the transition into English language performance, and that definitely affects the film.

It could have been a lot more involved and exciting, but in the end, this one just ends up being a bit of a misfire.

Still, it’s another vampire title worth exploring with DK Books’ Monsters in the Movies, and it shows that even in today’s day and age not all vampire movies are good. On the plus side, this one was nicely bloody, and had lots of Sinatra tunes. 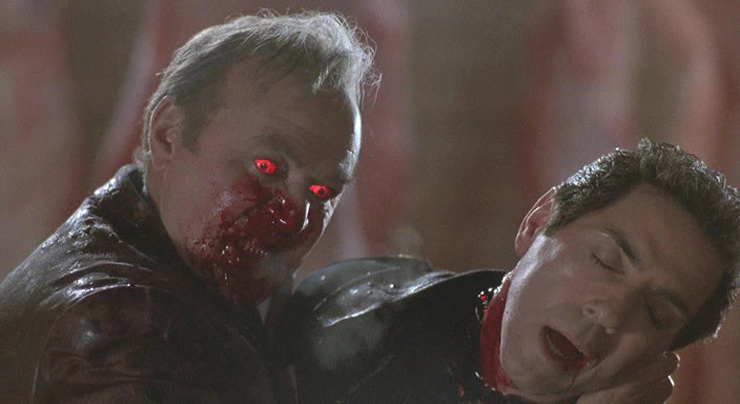