Edward James Olmos joins the main cast this week as the division’s new lieutenant, Martin Castillo, and with his steely eyed glare on Crockett (Don Johnson) the story swings into high gear.

One Eyed Jack was written by Alfonse Ruggerio Jr., and first aired on 2 November, 1984. An old flame of Crockett’s Barbara Carrow (Janet Constable) shows up in his life, and he soon finds himself framed for accepting bribes, while he and Tubbs (Philip Michael Thomas) are working on a case centred around Albert Lombard (Dennis Farina), and a bookie named DeMarco (Joe Dallesandro).

When Crockett confronts DeMarco over the money Carrow’s husband owes, and the tools that have been taken from him (which he needs for his business) Lombard begins to cause Crockett problems.

He ends up under investigation by Internal Affairs, who have assigned Schroeder (Dan Hedaya) to dig into the detective’s activities. Despite being assigned to desk duty, Crockett and Tubbs keep working the DeMarco/Lombard case, which takes a dark turn when Barbara turns up dead.

Tubbs goes undercover in the Lombard operation and shakes things up, and Castillo, though he may be stand-offish, shows that he will defend his detectives vigorously. He’s a character one really doesn’t want to get on the wrong side of.

A great episode that continues to look great, and play out cynically with each and every climax.

This episode was the last to be Executive Produced by series creator Anthony Yerkovich, Michael Mann took the reins from here on out. 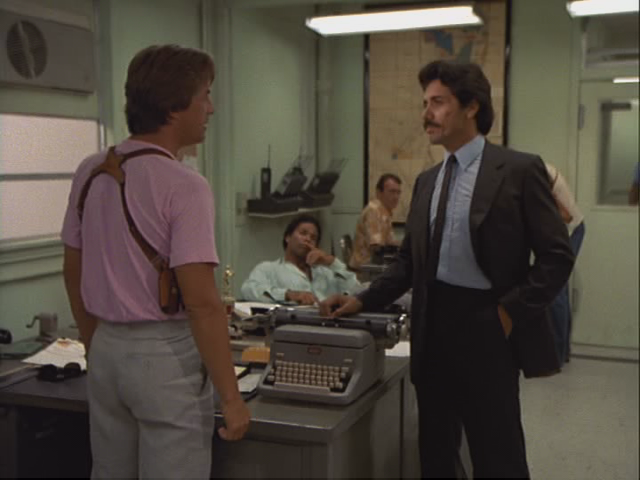 No Exit introduced me, and most of the world to Bruce Willis.

First airing on 9 November, 1984, Maurice Hurley pens the teleplay from a story by Charles R. Leinwieber. The episode finds Crockett and Tubbs working to take down an arms dealer, Tony Amato (Willis).

Amato also happens to be a very abusive husband, which really riles up our heroes, and while they may not want to work with the Feds on this case, they are more than willing to set aside their differences to deliver some justice to the criminal.

Between hurting his wife, Rita (Katherine Borowitz), Amato is supplying weapons to anyone who will buy them, and there is a rash of machine guns on the streets. But Amato has a bigger plan, and more dangerous product, stinger missiles, he is looking to sell.

While Tubbs works Amato, Crockett gets in touch with Rita, and lets her know what is going on, and that her time with Tony is, thankfully, almost up.  But after they bust him, when the Feds jump the gun (and other Feds circumvent the court), Rita still doesn’t feel safe, and resolves things on her own as we dive into a freeze-frame ending.

The music includes Teddy Pendergrass’ Stay With Me, and Phil Collins’ I Don’t Care Anymore.

I got a laugh out of the fact that David Soul of Starsky and Hutch fame directed this episode, while his partner, played by Paul Michael Glaser, directed the second part of Calderone’s Return last week.

We head back to Miami for more music, and cop drama next week.