There’s the signpost up ahead, it’s time to take a turn into The Twilight Zone: The Complete Series on blu-ray thanks to Paramount Pictures.

Up first is the Rod Serling scripted, A Kind of Stopwatch. The series creator adapted a story by Michael D. Rosenthal and debuted the episode on 18 October, 1963.

Patrick Thomas McNulty (Richard Erdman) is a talker, an opinionated talker, and everyone in his office, in his local pub, everywhere, seems to dislike him. He’s dull, boring, and loves to argue and share his opinion. But he’s about to take a left turn into the Twilight Zone.

After a rough day at work, he ends up in his local, and meets an odd fellow named Potts (Leon Belasco). After a conversation, Potts gifts him a stopwatch that when used, freezes time for everyone by its user.

McNulty delights in using the stopwatch, messing with people and things, and taking what he needs from them until the twist to the episode happens, and poor McNulty gets a fate no one deserves – stuck, alone, forever.

That idea is rather haunting actually, and as fun and light-hearted as the episode is, McNulty’s fate is all manner of terrifying.

The Last Night of a Jockey was also penned by Serling, and starred Mickey Rooney. Airing on 25 October, 1963, the story follows Grady (Rooney) a jockey who is suspended pending an investigation over drugging horses and fixing races.

As he languishes in his one room apartment, awaiting a phone call with the results,  he is tormented by the voice of his supposed conscience. He’s tired, worn out, hates himself, but he is about to be giving one last wish, provided by the Twilight Zone.

Rooney plays it to the hilt.

Grady clings to the belief that he can ride out this suspension, that he can end up on top, but his self-hate seems to constantly sabotage his own actions, and his past won’t let him escape it. He wants to be the big man again, he wants to be on top.

But what revelation will the Zone give him?  How will his wish to be big again play out? And what will the phone call from the racing commission mean for him?

This one is a fun, if basic episode that warns you to be careful what you wish for.

The extras include sponsor billboards and a commentary by Rooney. 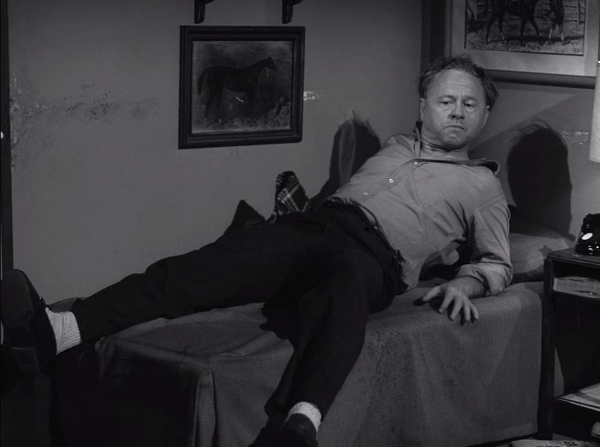 Living Doll is the final episode this week, and was penned by Charles Beaumont. With an original airdate of 1 November, 1963, Telly Savalas confronts the age old terror provided by spooky dolls.

Erich (Savalas) is less than thrilled that his stepdaughter, Christie (Tracy Stratford) has brought home yet another doll, the new Talking Tina doll. He hates it from the off, and soon realises why, it tells him she hates him, and that she’ll kill him.

No matter how he tries to get rid of it, it always returns. He thinks his wife, Annabelle (Mary LaRoche) may be behind it, something she denies, and soon Erich finds himself taking on an the evil Tina doll.

Erich is a bit of a tool, and rather unlikable, he rather deserves some of the things that happen to him but the further the two go, the more terrifying the story becomes. Who will triumph, and win the little girl’s heart?

The episode is dark, frightening, and speaks to families, divorce, love, and spooky dolls.

The extras include a delightful commentary by June Foray who provided the voice for the doll known as Talking Tina, as well as an interview. There is also a commentary by Zone fans and historians, Marc Scott Zircee and George Noory, another by television historian Gary Gerani, an isolated score by Bernard Herrmann, and a radio version with Tim Kazurinsky.

Next week we venture even further as we continue to explore The Twilight Zone: The Complete Series, available now from Paramount Pictures.