One of television’s best written and most intelligent shows is back for a second season, having already begun with its two-hour premiere on AMC this past Sunday night.  So much happened on the finale last season that I had more than a few “oh YEAH” moments during the initial catch-up sequences, but then I was right back into the story again; the months in between all but forgotten.

We immediately return to where we left off; the rain-drenched streets of a dark and brooding Seattle city-scape lending the same ominous atmosphere to the question followers of the show would most like answered:  Who killed Rosie Larsen?

Many thought that the case had been solved last season when Stephen Holder (Joel Kinnaman) presented his partner, the intrepid Detective Sarah Linden (Mireille Enos), with a photo which seemed to contain damning evidence against Mayoral candidate Darren Richmond (Billy Campbell).  The police arrested Richmond, and Holder was left to clean up the end of the case while Sarah and her son, Jack, departed for Sonoma in the hopes of patching up her relationship with Rick (Callum Keith Rennie), the fiance who’d decided he’d been waiting for Sarah long enough, and had left her to return to California on his own.  After having just boarded her plane, however, Sarah received a call that told her the photo Holder had used as evidence to close the case was, in fact, a fake.  Floored by the revelation and all it could imply, Linden barely managed to get herself and Jack off the plane again before it took off.

In the meantime, the unstable Belko (Brendan Sexton III), who is a close friend of Stan Larsen, Rosie’s dad, finally killed his crazy freakish mother, and then went after Richmond, perhaps hoping that he could somehow avenge Rosie’s untimely death if he could kill her killer.  He opens fire on Richmond and is subsequently arrested, while political aids Jamie (Eric Ladin) and Gwen (Kristin Lehman) head to the hospital to see if Darren can survive the shooting, let alone the dive his career will have taken now that murder charges have been laid.

Stan Larsen (the brilliant Brent Sexton) is having trouble of his own.  His wife, Mitch (played so well by Michelle Forbes that she deserves every acting award ever invented for the first season alone), has left him alone with their two young sons and her sister, Terry (Jamie Anne Allman).  Neither adult really knows where Mitch has gone, nor if she’ll ever return.  Her pain at losing Rosie had become too much to bear, and she left her family behind; her whereabouts unknown.  So Stan now not only has to find a way to stave off his sons’ mounting questions about their mother, but he also needs to find a way to make them feel safe, even as the Larsen family itself begins to unravel.

Linden and Jack move back into a hotel room, and she quietly tries to further investigate the Larsen case while avoiding Holder, whom she believes has betrayed her with the photograph.  Gwen and Jamie bond slightly while they wait for Darren to come out of surgery, and Gwen reveals her suspicions of Richmond’s whereabouts the night Rosie was killed.  Jamie doesn’t buy it and kicks her out of the hospital, only to realize that he may potentially have to be the only “family” his boss has around him if he survives the surgery.  Stan visits Belko in jail after Holder has a chat with him and attempts to calm him down.  But when more evidence begins to arise in the Larsen case (which they had just closed the day before), Holder – separately from Linden, who’s finding out things on her own – also begins to suspect that they may have arrested the wrong man.

Now, I have to admit, I had so much fun “investigating” this series last season.  My brain would not shut down for hours after each episode, sleepily turning over every new piece of evidence until it sometimes inhabited my dreams.  I was on the suspect tracker and message boards each week, clicking off my chosen suspect and seeing what others had to say.  There were many interesting theories – and some that were just ridiculous – but I was always fairly confident that understated fiance Rick was The Killer.  I felt that the case was going to end up being more personally related to Linden than it had at first seemed, and Rick was awfully eager to get her out of Seattle and into a happy marriage.  Which – fair enough – but seriously, who waits until the day their fiancee is supposed to move to start planning the wedding that’s to occur mere weeks later?  Besides, Callum Keith Rennie is always a safe bet to be the bad guy, in my experience!

The thing to remember is this:  only two weeks have passed since Rosie Larsen died.  Fifteen days.  It’s actually quite amazing that Sarah Linden accomplished as much as she did in so short a time, really, especially considering the fact that no one believed there was even a body to be found, let alone a death to be investigated.  It was her dogged determination that led to the discovery of Rosie’s beaten and broken body in the first place.  It was supposed to have been her last day of work, and she could have just left when they were calling it a runaway or a teenaged girl’s secret time spent with her ex-boyfriend.  But she stayed and persisted, against all odds, managing to find the body at the end of the first day, and leading to what would be one of the most heart-wrenching scenes I think I’ve ever witnessed.  The moment that Stan and Mitch Larsen realize their daughter is dead is something I doubt I’ll ever forget, and really brought home the brilliance of this series to me.  I’ve been hooked ever since.

While I will continue like Rick as the killer until he’s definitely not (it’s just more fun that way), I have to admit that the season premiere/Day 15 had me back to thinking it’s got something to do with people in the Mayor’s camp.  It seems to keep coming back to the waterfront project, and I’m thinking that the whole thing is a lot larger than one girl’s death.  I think there are cops in on it, I think the Mayor is in on it, and I think Holder was brought in on the case because he’s generally known as an ex-addict and a screw-up.  I think Linden was expected to leave, and Holder would just do what he was told and not do any thinking for himself in the hopes of making detective. 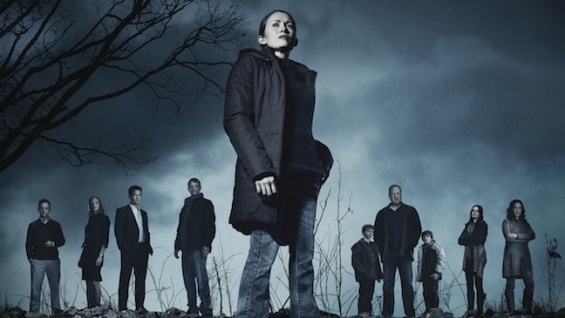 My current theory involves Rosie being used to get closer to Richmond, but she genuinely liked him, and refused to do anything that would put him in a bad light.  So she was killed, and Richmond was framed for the murder, sort of.  At the very least, her body was discovered in one of his campaign cars, so the whole case shed a bad light on those in his camp and weakened his political clout.

There is also a constant reminder from pretty much everyone around her that Sarah once had a similar case and that she didn’t come out of it unscathed – everyone keeps ominously refering to what happened “last time”.  That’s another reason why I wondered if maybe this one was done to personally break her in the end, but we’ll see.  So far, she’s chewing a lot of nicotine gum to kick her smoking habit, but she’s not nearly as fragile as those who were around “last time” would have us think.  I never really liked Belko as the killer, nor Richmond.  I don’t think it’s a woman, and while Gwen is obviously jealous of anyone who’s closer to Darren than she is, I think hers is more focused on his dead wife.  It’s impossible to compete with a ghost, and she knows that all too well.  I doubt she would have seen young Rosie as a threat to her relationship with Darren Richmond, even if she did sort of resemble his late wife.

I know – I’m pretty much just crossing people OFF the suspect list, instead of adding them to it, at this point!  I suppose that comes from my X-Files days of Trust No One, but it really seems like everyone in this case is hiding something.  Maybe not the identity of Rosie Larsen’s killer, but certainly something they’d prefer to be kept secret.  I think it’s safe to say that this incarnation of the series has separated itself from the trail blazed by the original Danish version, so now it doesn’t matter who the original killer was – now it’s anybody’s game.

And since my beloved Lost Girl has begun its break between seasons 2 and 3, my Sunday nights are all about finding out why The Killing was just the beginning…

The Killing airs Sundays (and several other days and times) on AMC.

Also, for more fun, check out the interactive features on AMC’s website, including the Suspect Tracker, Case File and search Rosie’s Room!