Bride of Frankenstein picks up right where the first one ended with the angry townspeople and trying to burn out the monster.

After most of the townsfolk amble away in a post-mob funk we learn that both the monster and Henry Frankenstein (Henry?? Really?? I know I harped on that last time, but wow, such a poor choice of name) survived.

Henry appears to have learned his lesson, and is happy to rest and recuperate in the arms of his wife, while the monster rambles across the country-side just trying to survive.

The Monster never instigates any violence himself, it’s clear he doesn’t know his own strength and causes accidents because of that. People fear what they don’t understand, or appear monstrous and pain and suffering tend to follow The Monster because of it.

Until, the Monster comes across a blind man, the two become friends, and the Monster even learns to speak, an idea initially opposed by Karloff.

Meanwhile, Frankenstein is visited by the eccentric Doctor Pretorius (a very cool sounding name!) unfortunately, his character introduces one of the wackier things into the film, tiny little homunculi he keeps in jars. He has a group of them, including one that seems to be a little Henry VIII. Weird.

Pretorius urges Frankenstein to help him and share his secrets, but Henry (ugh) will have none of it, see he’s learned his lesson.

That is until Pretorius in one of his outings, comes across the Monster himself, who has now decided he needs a friend, which ties in nicely with the doctor’s own plans.

Arranging for the abduction of Henry’s wife, Pretorius blackmails Frankenstein into helping him and the two work to create a mate for the Monster.

I have to say, that once he starts working in the lab, Frankenstein really doesn’t seem concerned about anything but what he’s doing, only occasionally worrying about what he’s doing or his kidnapped wife.

And finally in the last five minutes of the movie, the pair of scientists achieve success and bring to life The Bride.

Now, I have to tell you, I think she’s kinda hot.

I’m willing to admit I’m a little odd on that one.

Sadly, she wants nothing to do with the Monster either, poor guy.

Still, instead of trying to escape, the two resurrected beings stay in the lab, and set off the convenient self-destruct, destroying themselves as Henry, re-united with his wife, flee the crumbling building out into the country-side.

This one is just good fun, and has all the trademarks that we have come to associate with the UNiversal Monsters, the lab, the storm, the monster, the almost tongue-in-cheek humor.

The film never seems to take itself too seriously, and consequently doesn’t expect its audience to either. I mean, it’s about a man-made monster created from recovered body parts, how serious can it be?

Course on the flip side is the indictment of how quick we as a society are quick to judge someone who doesn’t look like we do.

The Universal Monsters are good fun, you should have a look. 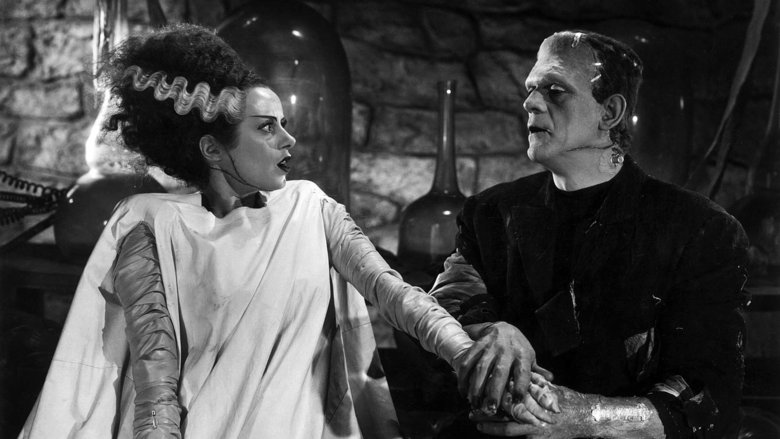