The Hirogen return in this feature length episode that first debuted on 29 November, 2000 and was written by Bryan Fuller, Raf Green and Kenneth Biller from a story by Fuller, Green and Jack Monaco.

The Voyager answers a distress signal from a Hirogen station only to find death and destruction, as the holographic prey the Hirogen have created, using technology that Janeway (Kate Mulgrew) has given them, have become too cunning for the hunters.

Appearing to be undefeatable, the holograms are proving too much for the hunter species, and they turn to the Voyager for help.

The crew join in the hunt, feeling partly responsible for giving them the technology, and soon find themselves locked in combat with an enemy who seems to be able to out think them, and kidnaps the Doctor (Robert Picardo).

The story features Jeff Yagher as the (delusional?) leader of the holograms, Iden. I last saw him in V- The Series. Who in an attempt to recruit the Doctor shows him what it is like to be prey in a Hirogen hunt.

There is a discussion of rights as the beings have the ability to grow and learn, and when Janeway reveals she may not help them, the Doctor foils her plans (betraying the crew?), and joins the holograms. 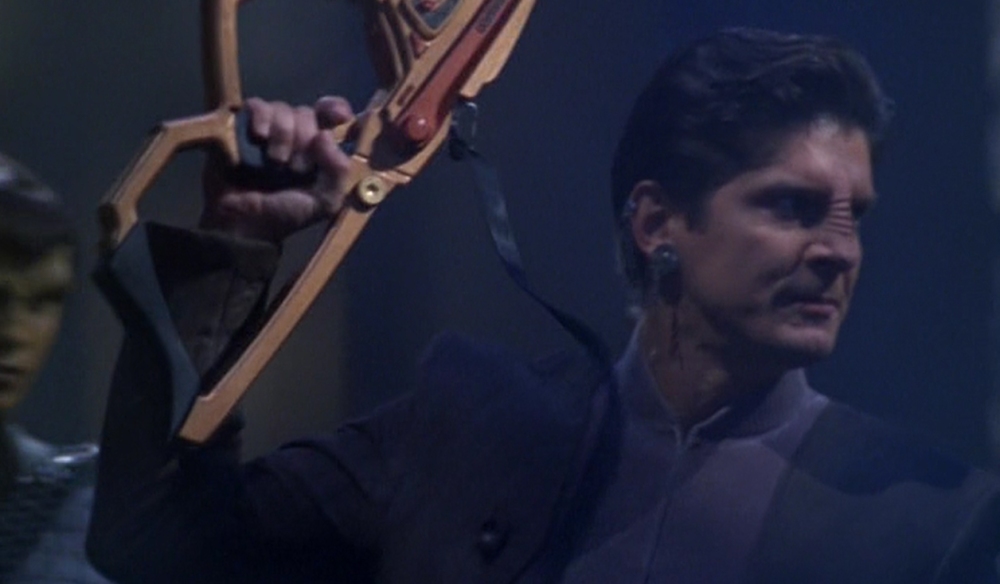 But they may not be all that he aspires to, as they are willing to do anything to succeed, and survive – which apparently includes kidnapping Torres (Roxann Dawson) to help reprogam them to enhance their abilities, and weapons, or as the Doctor believes, pursue peace.

There’s a lot to unpack in this episode, as Janeway’s gift of the holographic technology changed the Hirogen culture, but it also impacted the holographic creations they hunt.

Janeway and the rest are determined to recover Torres and the Doctor before the Hirogen hunting party finds the holograms’ ship, but there is a pall of tension hanging over the entire sequence of events as both sides commit terrible things for their beliefs.

This ends up being a smart, fun, and tense episode that balances battles, with recognisable themes and dilemmas, that are all Trek. B’Elanna Torres is given a nice arc on the holograms’ ship, as does the Doctor, as he contemplates his alliance with the holograms and where his place is.

The climax comes hard and fast, and the Doctor is faced with choices, and consequences.

It’s also nice to see the Hirogen back. It’s been a few seasons since we’ve seen them, and they come back in a solid story that shows they are still dangerous. The holograms also prove to be a potent threat, while also an amazing lifeform, which, of course, helps conjure discussions.

The Human Adventure continues Thursday with another pair of episodes from the seventh and final season of Star Trek: Voyager, as I explore The Complete Series on DVD from Paramount Canada.