There’s a murderer aboard the station, and the bodies are piling up. To understand, and to solve the crimes, Ezri summons the memories and the personality of one of the Dax symbiote’s most dangerous hosts, Joran Dax.

Sisko (Avery Brooks) and Odo (Rene Auberjonois) are determined that the killer be brought to justice, and while O’Brien (Colm Meaney) begins to piece some of the murders together, Dax is haunted by nightmares featuring Joran (Leigh J. McClosky) who may be able to help resolve the murder and bring the killer to justice.

But will Joran be able to push Ezri over the edge to commit murder?

There are some issues with this episode. Sure, Sisko trusts Dax, and she’s a counselor, and sure Odod is working on it, but why would an ensign be trusted with an investigation of this magnitude?

As much as I liked Ezri’s addition to the case, though sorry to see Jadzia go, this one shouldn’t have been a Dax story. A murder mystery aboard the station, sure, but let’s not give the case to the young ensign, especially when you know one of her prior hosts was a murderer.

Not my favorite episode of the season, but definitely better than the Quark/mirror universe episode last week.

Rene Echevarria pens this Odo episode that sees the changeling encountering one of the others of his race that was sent out to explore the galaxy. The new arrival asks Odo to leave the station with him, but the rest of the crew isn’t sure that Laas (J.G. Hertzler – who usually plays Martok) is one of the Founders.

Laas keeps pushing for Odo to leave pointing out all the ways the security chief is ‘forced’ to let go of his humanoid connections, and embrace who he is.

More problems arise when Laas kills a Klingon on the promenade, and he questions if he will get a fair trial at the hands of a humanoid court, but Kira (Nana Visitor) who has admitted to being in love with Odo, helps Laas escape so his influence on Odo is no longer on the station.

But she also loves him enough to tell him where Laas is, and leave the decision to Odo. Of course, he makes the right one, and returns to the station and Kira…

The Human Adventure continues next week as I explore Star Trek: Deep Space Nine – The Complete Series on DVD from Paramount Canada! 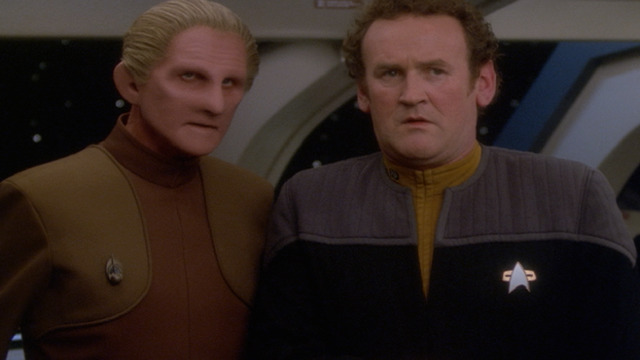