The Undying Monster, the next werewolf title recommended by DK Canada’s Monsters in the Movies book by legendary directory John Landis is suitably moody, dark, gothic, and set in England – despite the fact that most of them speak with American accents.

There’s an ancestral home, a curse, a pair of Scotland Yard investigators with a paranormal bent and despite the ridiculous runtime, only an hour, it’s rather entertaining and solidly made.

The Hammond House, on a craggy outcropping overlooking the village is dark and foreboding, but is home to Helga (Heather Angel) and her brother, Oliver (John Howard). When an attack happens one frosty night and leaves a woman in a coma from which she never recovers, a pair of Scotland Yard investigators (think of them as Mulder and Scully without the style, wit and daring) Craig (Aubrey Mather) and Christy (Heather Thatcher) arrive to find the truth.

There are crypts to be explored, rattling chains, family secrets and Americans pretending to be British but without the accent (which makes it a little odd when they use UK slang).

More of a mood piece than a straightforward werewolf film, though there is a werewolf in it, the film tells its story quickly, but entertainingly, without a second wasted. 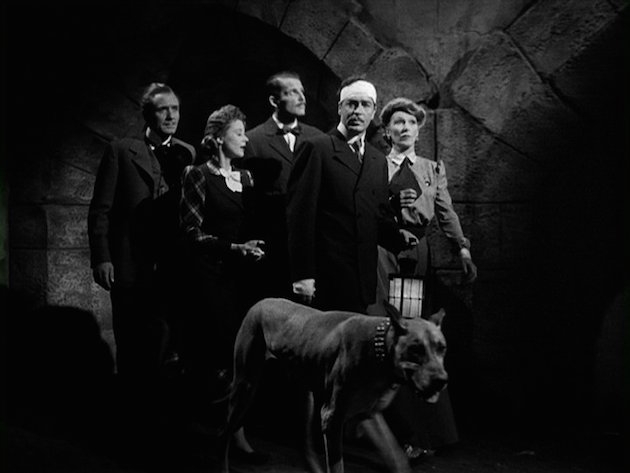 There are some flaws in the story, especially where it concerns the family friend and doctor, Jeff Colbert (Bramwell Fletcher) and his actions in a court case that arises from the death of the woman in the coma, but it’s glossed over for a nicely wrapped up ending.

I think, if they had taken their time, developed the characters a little more, than this could have been a true gothic horror that could easily have stood the test of time, and influenced countless films after it.

In fact, watching this film, as much as I enjoyed it, it just felt like there was so much missed potential to be something even greater than it was. It’s a could have been.

The werewolf makeup is a little iffy, but that’s ok, as the monster is barely glimpsed, and kept in shadows for the most part, only making an appearance at the end of the film.

I like the story, I like the beats, I like how the film skated on the edge of being an x-file before the series was even thought of, I just wish it could have been that little bit more.

That doesn’t mean you should avoid seeing this one, should the opportunity present itself. I think it’s well worth the watch, and you can find these and other macabre and moody recommendations in DK Books’ Monsters in the Movies!