Monsters in the Movies, by director John Landis and available from DK Canada, keeps the vampire films coming as I continue to stake my way through the chapter on the undead.

That brings me to this odd and dubbed entry from Italy that adds (?) to the sword and sorcery genre with some strange trappings including an army of blue men, strange carnivorous creatures, harems, faceless warriors, and eventually a vampire of sorts.

The story is a bit of a quest film as Goliath (Gordon Scott) seeks revenge, and the return of the inhabitants of his village, when marauders sent by the vampiric Kobrak (Guido Celano) take them hostage, some to keep his servants (the public rulers of the country he rules) happy, and the rest to serve as his army, or food. And he has his eye on Goliath’s betrothed, Guja (Leonora Ruffo).

But with his Herculean strength (and lack of clothes), Goliath will prove unstoppable even though he has to trash a kingdom, form strange alliances, and tromp through a desert sand storm. He will find his lady love, and stop Kobrak once and for all. 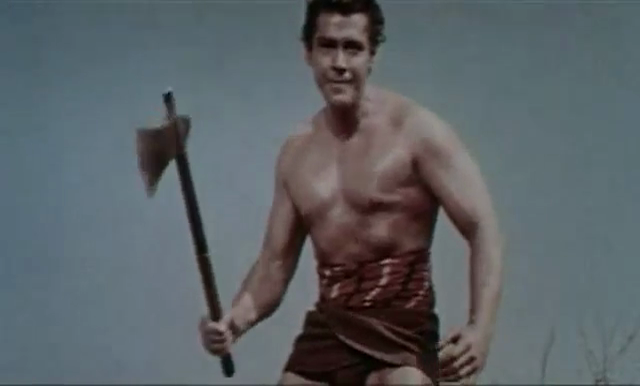 There isn’t a lot of undead action in this film, and the final confrontation with Kobrak is a bit of a let down. In fact there is so much going on in this film, in such a short space of time (it runs only ninety three minutes), that it feels like it is stitched together and rushed, Goliath wanders from one escapade to another.

There are some interesting ideas at work in the film, and not one character seems to bat an eye at the concept of robots in this ancient time, blue people, or even vampires (which don’t seem to follow the usual rules).

There is no real character development, and the action sequences are poorly crafted and shot, no emotional beats, no real fight choreography, and the story is threadbare, simply allowing the characters to tumble from one moment to the next.

The film features no scares, no blood, but revels in its Saturday matinee-esque nature. In that form, it serves fairly, and as such is completely forgettable.

Still, the film continues to broaden my film experience and knowledge and that, in and of itself, makes it worth the watch.  And I will say this, Monsters in the Movies, like the other film books I’ve explored before it, continues to introduce me to film from all over the globe, and it’s interesting to see the way familiar ideas, and concepts (and scary subject material) is handled in different parts of the world.

So pick up a copy of DK Books’ highly enjoyable Monsters in the Movies, and find something terrifying to watch tonight!