New uniforms, additions to the cast, and the unmentioned disappearance of other cast members propels Moonbase Alpha into its second season. The changes aren’t discussed, and we’re thrown into the new season with a brand new theme and opening credits which introduces new cast member Catherine Schell before her character is even introduced in the episode.

Metamorph launched the second season on 4 September, 1976 and was written by Johnny Byrne, and sees Alpha just short of a year after leaving Earth orbit approaching the planet Psychon which has large resources of titanium needed for repairs.

There is life on the planet, a scientist known as Mentor (Brian Blessed back for another go-round). He invites them to come down to meet and recover the Eagle expeditionary crew that travelled there.

Mentor, however has plans for the Alphans, he is working on a computer that is using the neurons and memory storage of human brains!

His shape-changing daughter, Maya (Schell), refuses to believe the things about her father that Koenig (Martin Landau), and Russell (Barbara Bain) learn about him, but she will soon be forced to make a decision about what side she wants to be on.

Of course, in the end she joins the crew of Moonbase Alpha on their journey…

The new uniforms, including jackets, look sharp, and the new security officer, Tony (Tony Anholt) make for nice additions. Command has been refurbished as well. There are lots of things that have changed, none of them addressed, but you have to wonder what happened between the previous episode and this one. Are they an alternate reality version of Alpha? Were they working on these new uniforms in some corner of Alpha throughout the first season? And what terrible thing happened to Paul, Bergman and Kano that they don’t talk about it?

The episode is more tightly paced than most of the first season, and there is a bit more of a lean toward action beats… it’ll be interesting to see how that plays out for the rest of the series.

The Exiles sounds like a take on Star Trek’s Space Seed, but let’s dig in anyway shall we? Written by Donald James the episode first aired on 11 September, 1976.

Alpha, during it’s tumbling journey through space, comes across objects in space, and within, our people in suspended animation. When awakened they tell a tale of their world being invaded and they escaped into exile. But are they telling the truth?

Maya seems to be doing all right considering she just lost her father, and Koenig and the rest seem quite content to give her important assignments right from the off. She also gets to show off her shape-changing abilities a few times.

I will say this though, the model work in this episode is fantastic, and the series continues to expand on Alpha’s equipment including thruster packs and some form of handheld scanner.

I also love the revelation that Alpha just isn’t on the surface of the moon, it has depths, it goes below the surface for a number of levels. And things have obviously changed since season one, as there is now a strict no pregnancy rule, as they don’t have enough resources

There’s also a weird moment when Maya assumes Russell’s shape and both attempt to have a little ‘fun’ with Koenig. We also see the beginning of a flirtation between Maya and Tony.

So while the story is a more of something we’ve seen before, the glimpses into character, lifestyle, humour, and props expands the series nicely.

Our travels through the unknown continue next week with Space: 1999! 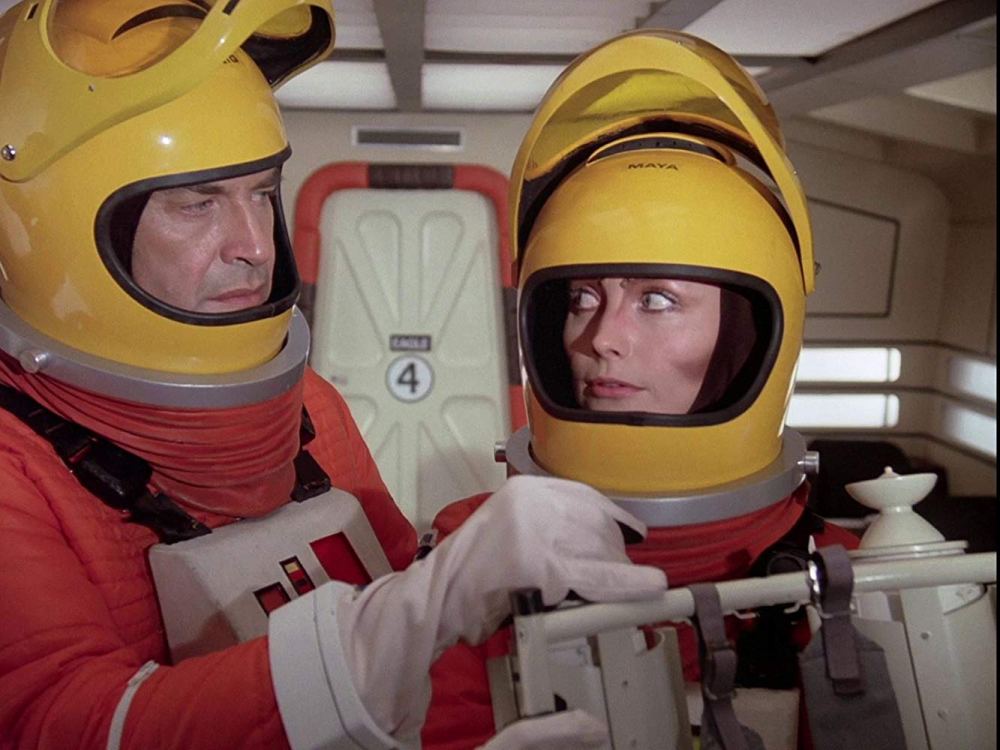