A failed democracy. Democrats and Republicans not representing the working class who are forced into voting for people picked by the party ‘elites.’ Despotism. Nazism. Parkland. Flint. Greed. Racism.

Micheal Moore’s films usually have a comedic hint to them to balance the bitter pill of reality that is being displayed by the documentary filmmaker, Fahrenheit 11/9 eschews that reassuring comfort and instead lays out a horrific representation of our neighbor to the south.

While some were left scratching their heads when Trump won (and remember, as is pointed out to us in the film, he didn’t want to win, and look less than thrilled when he did), Moore shows that this was only the latest in a long line of decisions and maneuvering on both sides of the parties that didn’t represent the desires of the common people.

Harrowing, heart-breaking, infuriating, those descriptors are simply the tip of the ballistic weapon that is this film, and one can’t help but wonder if we are in fact watching the death throes of what may have been a promising democracy as the parasitic powers that be living within its government tighten their grip. Highlighting the vile performance of Michigan’s governor Rick Snyder as a template for what was to follow, and the fact that Flint was sold out by both parties could leave one to wonder about the futility of preserving the United States, but seeing the way the Parkland survivors have risen up, organised, prepared, and educating those around the country, the beginnings of hope may begin to glow.

But Moore is quick to remind us not to rest on hope, when more than half of the country can’t even be bothered to vote, the disenfranchised need to be discussed, and we must learn why such a thing happens. Of course when the popular vote (Bernie) is replaced by party ‘nobility’ as chosen by a few elites as opposed to the people, it’s easy to see why people won’t vote.

But Moore also demonstrates that change can happen. We see the teacher strikes that finally made a difference (and honestly, what can of world do we live in where an educator has to work two jobs, and use food stamps just to get by? They should be treated better – but an uneducated populace is easier to control.

Whether you side with Moore’s politics or not, his films, like all good documentaries should create discussion, a dialogue that could ferment change.

While Moore has covered previous topics, and done it well, this one feels like his most personal film since Roger and Me, he doesn’t pull any punches, he shows faults on all sides, including his own, and offers up no real solutions, only suggesting that they need to be found before the 45th President of the United States becomes the last president of the United States. 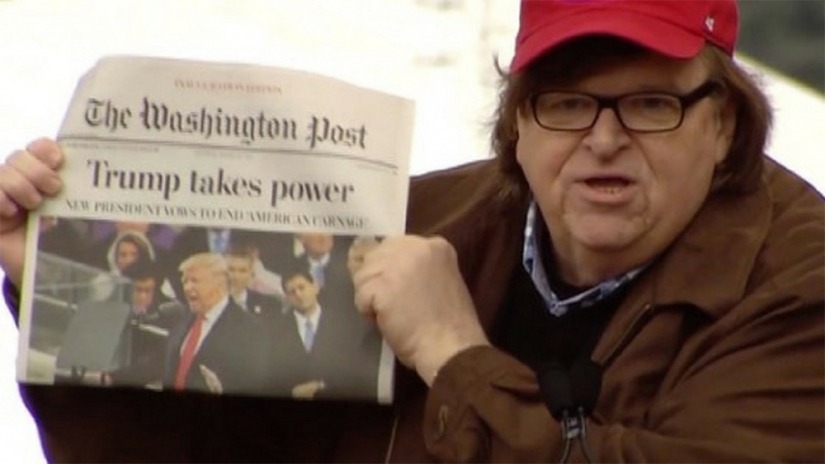