Ron Howard, a reliable journeyman director takes us back to a galaxy far, far away this week when Solo: A Star Wars Story hits theatres. Penned by one of the most reliable of  the Lucasfilm scribes, Lawrence Kasdan, and his son, Jonathan Kasdan, the film introduces Alden Ehrenreich in the role made iconic by Harrison Ford, the roguish scoundrel, Han Solo.

What follows is an adventurous romp that lacks the sense of fun of the Original Trilogy, but still captivates while giving us a backstory to a character that didn’t really need it. Ehreneich has his work cut out for him, and he makes the role his own. He doesn’t play Harrison Ford, he plays Solo, and that makes all the difference.

The downside to the film is that as fast-paced as it is, and as much as it expands the world, it also plays like a Topps Star Wars card checklist, there are a number of things the film has to do: Han has to escape from his homeworld of Corellia, spend time in the Imperial Academy, meet and rescue Chewbacca (Joonas Suotamo) – the Empire has been using Wookies as slave labour -, he has to meet Lando Calrissian (Donald Glover), make the Kessel Run in less than twelve parsecs, and win the Millennium Falcon from Lando in a Sabacc card game.

The chemistry between Ehrenreich and Glover is fantastic, and honestly, Glover needs a spin-off Lando film, yesterday. He’s fantastic as the smuggler originally portrayed by Billy Dee Williams.

Everything in the film looks great, it expands nicely on the already established universe, and joyously ties in canon from the Rebels and Clone Wars television series with a surprise or two – including a familiar looking statue from Raiders of the Lost Ark. 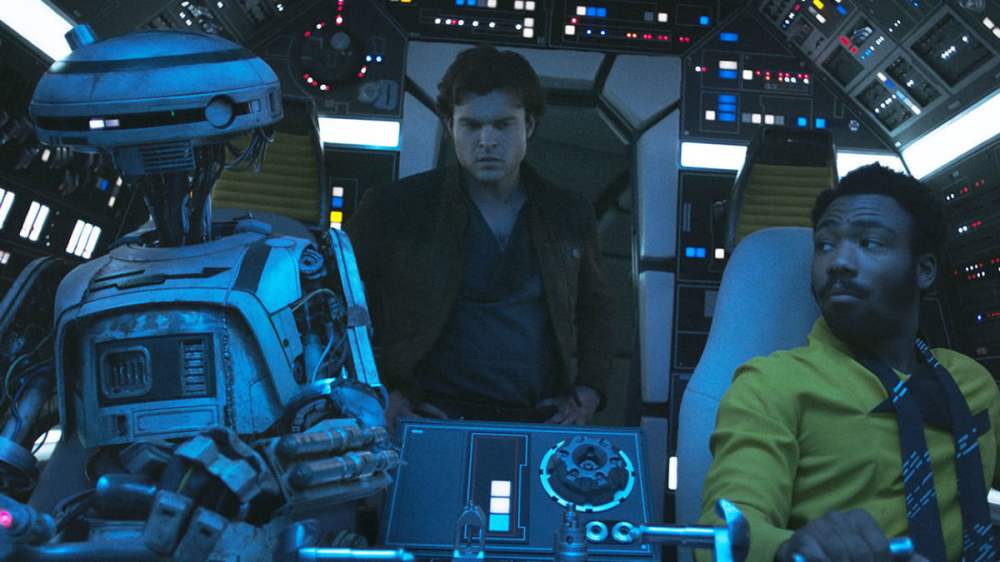 Howard does a good job of keeping the action moving along, and John Powell delivers a solid score that introduces new themes, while bringing classic John Williams cues and themes to play as well.

The cast includes Woody Harrelson, Emila Clarke, Paul Bettany, Thandie Newton, Jon Favreau, Linda Hunt, and Phoebe Waller-Bridge and while names like Harrelson and Favreau may seem out of place in the Star Wars universe they make their characters real and believable. And of course watch for Ron’s brother, Clint to make his cameo.

The production design, and the style of the film is something that fits within the established canon, but it’s getting very interesting with how many variations of stormtrooper uniforms there actually are.

Ehrenreich has signed a multi-picture deal with Solo, so you can expect that if it does well, there will be sequels, and the film does end with setting up an interesting story thread.

Personally, I would very much like to see Ehrenreich turn in another Solo performance, but only if that means Lando comes back!

The film is filled with everything a Star Wars fan would expect, battles, fun if occasionally cheesy dialogue, lasers, fast ships, droids, aliens, roguish scoundrels, and an Empire that needs defeating.

It’s a fun, enjoyable film that has a couple of pacing issues in the first half, but will entertain and give us a look at a young would be outlaw, whose arrogance makes him think he’s a bigger deal than he is. Happily the film doesn’t suffer from the same fault – it’s a great ride!