I boldly waited for more Star Trek. Having discovered the series in the early 70s as a child, it became a large part of my life. I loved my weekly forays with the Enterprise. Every week they were there. Sometimes more than once a week.

But then there were no new episodes. I needed more Trek episodes!

I had seen all of them, and even at that age was beginning to know a lot of them backwards and forwards (though Season Three episodes were rarer for me).

I came across a collection of the Star Trek Gold Key comics, and then there was a rumour of a movie. Star Trek: The Motion Picture premiered on 8 December, 1979. I remember seeing it, the new, beautifully refitted Enterprise, the unusual uniforms (they have rather grown on me over time), the wrist communicators, and even then, I enjoyed it. I even remember the McDonald’s Happy Meals associated with the film.

Then the first bunch of novels came out and I got my Trek fix that way. But there was no new Star Trek on television. And while a few years pass really quick as an adult, the trip from the tail end of 1979 to the second film, Star Trek II: The Wrath of Khan seemed to take forever. 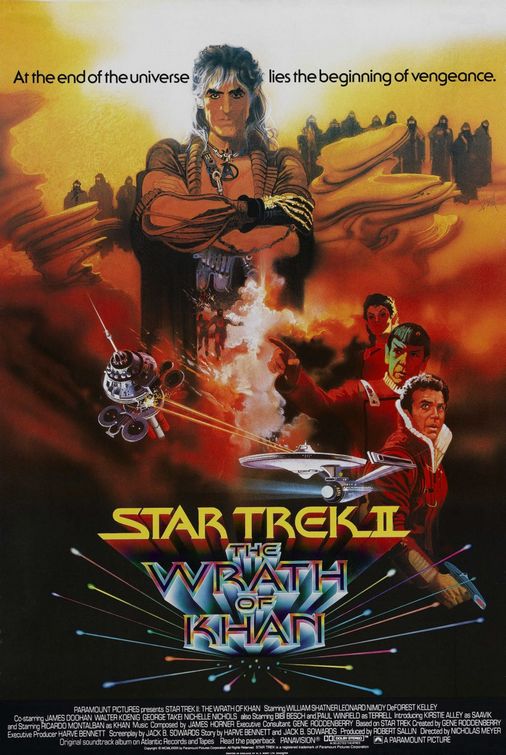 Khan premiered on 4 June, 1982, and this updated take on the series seemed marvellously suited to the big screen.

This was high Trek adventure and that ending!! Can you imagine what it was like to experience that as a young boy, not knowing, not even conceiving that two years later the story could or would continue?

I was stunned, gutted and thought I may have a new favourite film.

The book series continued, there was a comic series (on and off again), and there were the reruns. But there just seemed like way too long between new actual adventures. What was I going to do?

Happily there was another film. I remember reading the entire novelisation (sprawled in my front yard) of the film in one day before I saw the movie opening weekend. I had to know what happened.

Shortly after that, I was on my way to live in Bermuda, and thanks to the island, our family finally picked up a VCR, and I was able to enjoy the films repeatedly.

But there was still nothing new!

About the time there were rumours of a Star Trek IV, I remember coming across the first hints of a new series, set a long time after Kirk and company was being developed. This was long before the internet, I came across this piece of information in Starlog magazine.

I tried to find any mention of it that I could, but before it came along, Star Trek IV: The Voyage Home opened on 26 November, 1986.

It was great to see Kirk and everybody on the big screen yet again (and a new Enterprise!), but the wait for the films was maddening. I really needed episodic television.

So imagine my delight when we brought home a rental copy of Trek IV on VHS, and there was a teaser trailer for Star Trek: The Next Generation!! With a release date approaching, I was ready… I was so ready for new adventures.

Now if I could just survive until September of 1987, and find someway to see this new series.

I was so ready to continue my travels in the Trek universe, because the Human Adventure was just beginning…