The Sci-Fi Chronicles continues to bring me a lot of fun films, and flashbacks to my youth. And now, I get to dive into some John Carpenter films, that’s the good news. The bad news is I’ve previously covered almost all the ones the book lists, so I had to leap forward to 1984, when he served as executive producer on this science fiction tale, based on the ‘actual incident,’ but more likely nothing more than an undying urban legend, and using it as a launching point, from 1943.

The film stars Michael Pare and Nancy Allen, and it’s a bit of a fun time travel tale.

Dr. Longstreet (Miles McNamara) is working on a way to hide American naval ships from the enemy, and one of his tests on the U.S.S. Eldridge causes the ship to disappear completely, and two of it’s crewmen, David Herdeg (Pare) and his pal, Jim Parker (Bobby Di Cicco) are catapulted forward to the year 1984.

Here they encounter Allison Hayes (Allen) and try to come to terms with their new reality, and their desire to get back home, to their friends, loved ones, and Jim’s very pregnant wife, Pamela (Debra Troyer).

It’s not going to be easy though, because there seems to be something wrong with Bobby, and he literally disappears from a hospital bed, leaving David alone in a future he doesn’t understand. So he and Allison end up on the run, trying to piece together the experiment, and find him a way home. 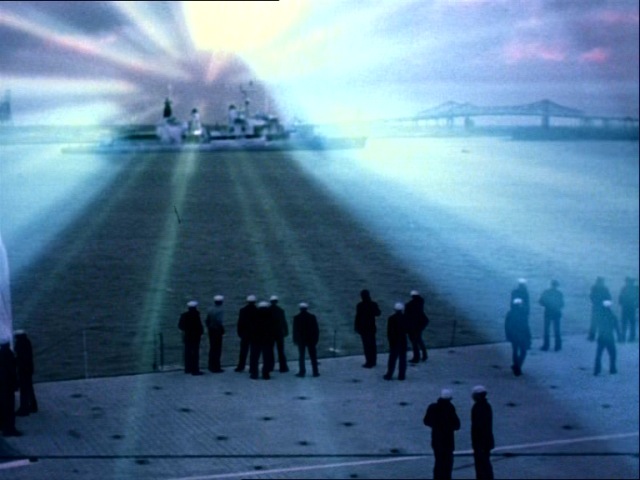 Their arrival in 84 is tied to a town that has completely vanished, buildings, people and all, an occurrence that is being investigated by Barney (Stephen Tobolowsky)who is working alongside the government and Dr. Longstreet (now played by Eric Christmas), as they continue their experiments.

Some (most) of the acting is as bad as some of the effects, but the story (or parts of it), its ideas, and some of its execution is a lot of fun, especially the culture shock of their new era. I don’t think I’m the biggest fan of the director either, his film doesn’t feel or look cinematic at all, and seems more akin to television episodes of the time. That may have something to do with budgetary constraints, but it definitely feels more 80s television movie than 80s feature film, course the tune midway through the film doesn’t help.

The film hasn’t stood the test of time very well, and, sadly, I don’t think was put together incredibly well in the first place. I remember enjoying a lot of this film when I was younger and it first came out, but perhaps that was just my fascination with time travel, and the idea of the movie, and not so much the film itself.