How much do I love this book?

Let me tell you!

This gorgeous, coffee table book, available from DK Canada, penned and compiled by director John Landis (who directed my favourite werewolf movie of all time, An American Werewolf in London, though I was introduced to him through the Thriller video first) has created a love letter to the monsters of the cinema.

I came to horror movies late. As a youngster, and to this day, I have a very active, perhaps even overactive imagination, and even catching images of The Shining and Poltergeist one afternoon while my younger sister watched them with my mother was enough to freak me out.

But when I started my own film education during my post-secondary education I found my way to a number of films, and have since learned the craft behind the images, and dove into the whole genre happily. I’ve seen a number of horror films since I started this blog, and even a lot before, but this book is bringing me a number of titles that I can’t wait to add to my list.

Landis, when he delves into the horror genre has illustrated that he can balance scares with some great laughs. He does the same thing in this book, a celebration of the grotesque, the ludicrous, and the macabre. 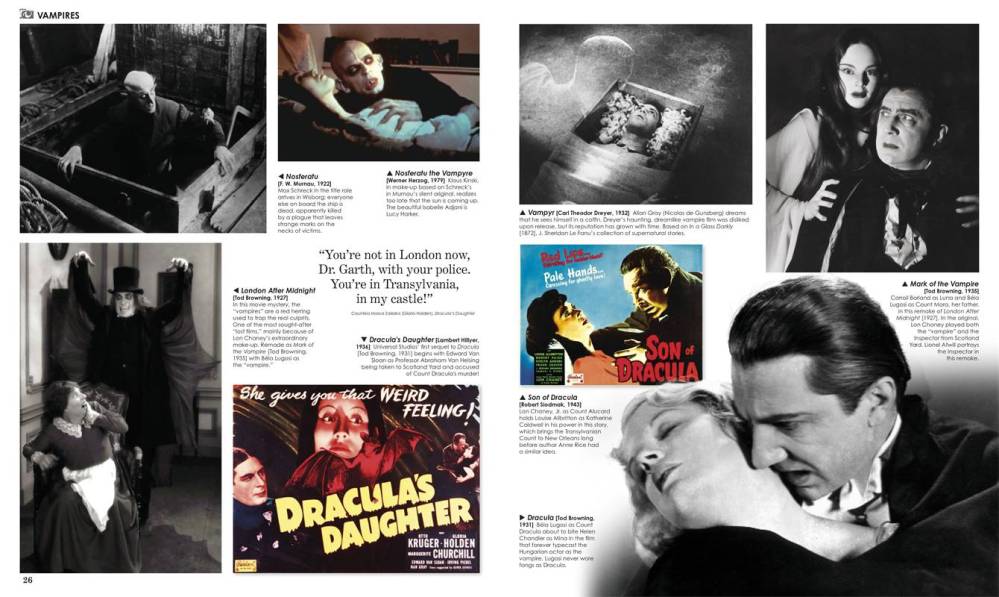 From classic and gold standard horrors, to films I’ve never heard of, Monsters in the Movies takes the reader through all the things that stalk us in the night, in space, in dreams, dragging their images into the light of this incredibly engaging book, filled with great pictures, all of whom are annotated with Landis’ comments and sly wit.

The book is broken into chapters like Vampires and Space Monsters, and features insightful interviews with some of the biggest names in horror, from Rick Baker to John Carpenter, from Cronenberg to del Toro, we get insights to the definition of monster, as well as what movies, and creatures scared and influenced these masters of the craft.

I love the layout of the book, it is packed with pictures from genre films from all over the globe, and consequently, I KNOW this book will see continued use long after this review is posted. There are plethora of films revealed here that I have yet to add to my Seen It list, and some of them look truly enjoyable, and with Landis recommending some of them, I can’t help but want to check them out.

Hammer films, giallo films, Japanese frightfests, and American schlock and terror, it’s all here, all safe to examine in the light of day, without fear of what may be lurking in your closet, under your bed, or right outside your window, and there can’t be a better guide than John Landis.

This one requires a space on the shelf of any genre and film fan. Check it out!