The Master (Anthony Ainley) returns to menace the Doctor (Baker) this week in The Mark of the Rani. This one was written by Pip and Jane Baker, and aired in two parts from 2 to 9 February, 1985.

The Doctor and Peri (Nicola Bryant) arrive in 19th century England in the small village of Killingworth, which will soon see a move into the blossoming of the Industrial Revolution, but something is going wrong, as the locals are turning violent and unpredictable.

The Master is behind it, but this time, he’s not alone. Joining him is another rogue Time Lord, the Rani (Kate O’Mara).

As the story unfolds we see that the locals are being exposed to a gas via the village’s Bath House, and the Doctor as they are pulled int things, discover that the infected villagers have a strange mark on them.

The story doesn’t keep the Master’s appearance a secret for very long, which is nice,  and it seems, for some reason, he is trying to stop the beginning of Earth’s industrial revolution, including the work of George Stephenson (Mark Grainger).

He forms an uneasy alliance with the Rani, who is a brilliant chemist, in addition to being an exiled Time Lord, and we learn that the violence is only a side effect, as the Rani needs to withdraw a chemical from the human brain, that upon removal prevents humans from having much needed sleep, leading to violent outbreaks. 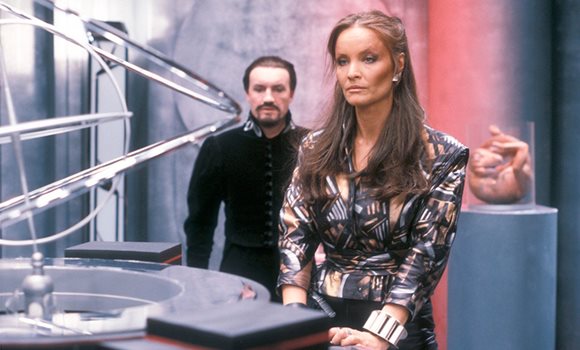 The two broker a deal, and work together, and the Doctor and Peri could be in serious trouble, not to mention that the Industrial Revolution could come to a halt before it even gets underway!

The Rani is merely interested in the human race as a resource, and the Doctor has to stop her and the Master before the entire world can fall apart, and the two evil Time Lords position themselves in the role of rulers.

This one ends up being a little slower than I would like, I mean with two villains, you’d think it would move along a little quicker, but it doesn’t and the Rani doesn’t do much to add herself to the Doctor’s list of memorable villains.

The Doctor seems to be having some fun, and his arrogant attitude, for me, is truly becoming enjoyable. That and the Rani’s TARDIS desktop are probably my favourite things of the story. And George Stephenson seems to be wasted a bit in this story, because it could have been the birth of steampunk in the Who universe, but the inventor, and his steam engine, merely plays a supporting part.

So, of course, the Doctor outwits the pair of baddies, Peri gets captured and finds herself in trouble, as always, and the story ends with history continuing it’s course, and our heroes travelling away to their next adventure, while the Rani and the Master slip away to menace another day.

I will say that there are some nice location shots, which open up the story rather nicely, I just didn’t find it as engaging a story as I wanted to. Perhaps next time, when we encounter a familiar face in The Two Doctors.