Frank Sinatra joins Gene Kelly in this recommendation from the Great Movies – 100 Years of Film book following my screening of Singin’ in the Rain.

The two crooners star as naval officers Clarence Doolittle (Sinatra) and Joseph Brady (Kelly). They arrive in Los Angeles, having been decorated for their service on a four day leave.

The plan is to chase down some dames, and have a great time singing, drinking and carousing. But within moments of landfall they are grabbed by police who drag them to the station to help them out with a young boy, Donald Martin (Dean Stockwell!) who wants to run away and join the Navy.

Escorting the boy home, they are introduced to Don’s aunt and guardian, Susan (Kathryn Grayson), who it seems both boys fall for right off the bat. They tell her a bit of a lie when they learn that she is an actor and would-be singer. Claiming that they can set her up with an audition for Jose Iturbi, the famed conductor and musician, they both try to win her heart.

Brady is the charmer, while Sinatra’s Doolittle is a little quieter and shy. I thought that would be odd, but Kelly is more comfortable on the screen and exudes charisma, while at this point, Sinatra was still honing his craft of acting, singing and dancing.

This is also the film that features the iconic dance sequence featuring Gene Kelly and Jerry the Mouse, and while Jerry doesn’t look as three dimensional as he should, the animators did make sure to add a shadow and reflection in the floor to match Kelly’s. It’s a nice touch that adds a touch of reality to the fun sequence.

Of course, as musicals of the time did, everything wraps up happily, amidst a big number, and every one enjoys a joyous Hollywood ending.

At two and a half hours, the film feels like it meanders more than it should, but it is a big budget, technicolor wonder, so audiences gave it the benefit of the doubt, in fact, it was nominated for Best Picture, Best Actor (Kelly) and walked away with Best Score.

Kelly choreographs, and the film is filled with some nice musical moments, as the boys tap and croon their away around Hollywood, and try and get Susan into see Iturbi.

I loved the fact that Dean was in this wanting to be in the Navy, and of course, incredibly awesome that I am watching Quantum Leap, and he’s an Admiral. And while the film was good, in the end, it felt overlong to me, and wasn’t as much of a buddy film as I had hoped it would be, it’s mainly Kelly’s film, and SInatra is pushed to the side, so much so that his romantic interest doesn’t even have a name, Clarence just calls her Brooklyn (Pamela Britton).

Still, it is a fun film, and Kelly is always fun to watch! 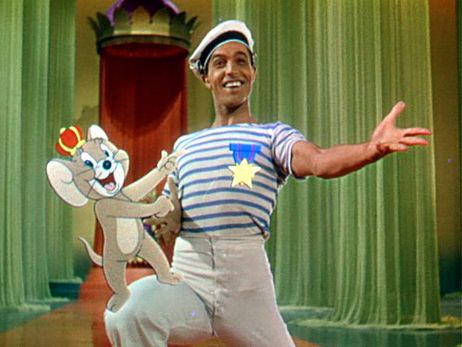