If you missed its run at the Drayton Festival Theatre, the British farce, It Runs In the Family runs deliciously amuck on the King’s Wharf Theatre stagein Penetanguishene starting today, and running to the 27th.

Written by Ray Cooney, and directed by Alex Mustakas, the farce is at its best when it reaches Howard Hawksian levels of rapid-fire dialogue, and Benny Hill-esque innuendo and slapstick.

It’s the holiday season in a London hospital and Dr. David Mortimore (delightfully brought to life by an increasingly red-faced Rob McClure) is trying to ready for his dissertation, while his colleagues are preparing for the yearly panto. With his wife, Rosemary (Susan Gilmour – wonderfully embracing her comedic turn) providing support, and his slightly goofy, but kind hearted friend, Dr. Hubert Bonney (the voice of YTV’s Eddie Glen in scene-stealing performance) at his side, Mortimore’s star seems to be on the rise.

With the revelation that he has fathered a son, Leslie (Gregory Pember, who gives a funny and occasionally poignant turn), who has just learned of his existence, and is in the hospital on his way to the local police station in the company of a Police Sergeant (Sven Van de Ven – who perfectly embodies the stereotypical British officer), Mortimore’s holiday season, dreams and life quickly become unhinged, as lies, mistaken identities, lies,  physical gags, and (more) lies escalate out of control until everything explodes in a fountain of seltzer-bottle slapstick comedy, bon mots, innuendo and kung-fu fighting. 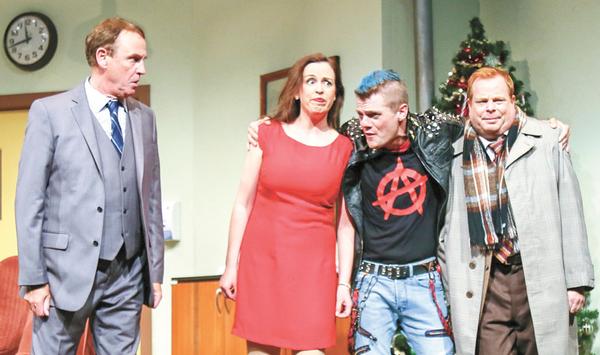 There isn’t a miscast role in the entire show, as a piece like this hinges on the performance of the solo and the ensemble, Mary Pitt is pitch perfect as the put-upon Matron with a playful edge, Nicolas Rice with his upper-class sideburns is the rigid upper-class stick that you would expect to be running a hospital, Ken James Stewart is the young and eager to please Dr. Mike Connolly, David Talbot is the master of the dirty looks as the dirty old Bill, and Jean Wright makes a hilarious appearance as Doctor Bonney’s mother.

The plot is simple, but the lies, the secrets, the identities get tossed around so easily, that the story rockets along, and the audience can only hold on, and try and catch their breath (if they can) between revelations, escapes, plunging needles, ‘tragic’ news and potentially happy endings…

The set design is simple and effective, as the play is kept to one room, and the window ledge beyond (which sets up some of my favorite bits in the entire show). The lighting and the costume design are exactly what you would expect from a Drayton production, smart, functional, and there to provide reality to the story.

All in all, and I don’t want to spoil anything but I will say watch Glen’s performance, I get the feeling that, like in the best Tim Conway bits on the Carol Burnett, he’s moments away from cracking up his fellow performers and reducing them to giggling messes.

The show is a lot of, admittedly mindless, fun. It’s bawdy, in that restrained British way, and the laughs are exactly what the doctors ordered.

Head over to Drayton Entertainment to get your tickets, and enjoy! 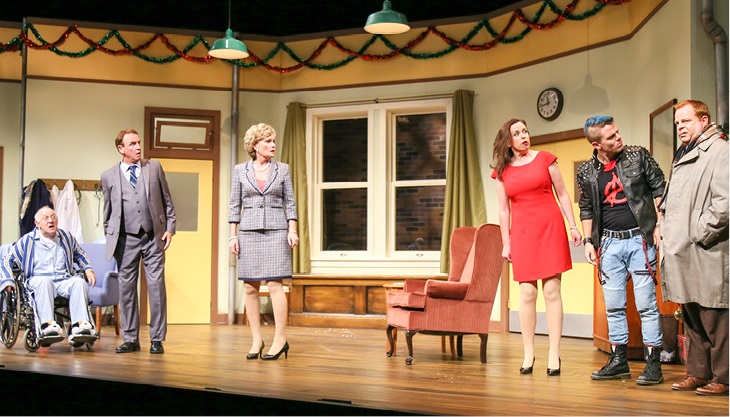