Killer Croc (Aron Kincaid) is the center of the first episode this week, in Sideshow. This one had an original airdate of 3 May, 1994, and saw Croc escaping from a prison train, and finds solace and refuge with a retired circus show that takes pity on him. Amongst the sideshow carnival is May and June, Siamese twins, both voiced by JoBeth Williams and Richard, the ringleader of the circus voiced by Kenneth Mars!

But how long will it be before Croc gets up to his old ways, and steals from those who have taken him in, or before Batman (Kevin Conroy) tracks him down?

I dig that Bruce was undercover on the prison train, posing as one of the fellow reporters. It’s unfortunate that both he and Croc end up taking a spill, and the Dark Knight is left to try and track the criminal down through the wilds (and seeing Bats run around the forest in full costume during daylight hours, you just don’t associate the costume or the character with daytime). 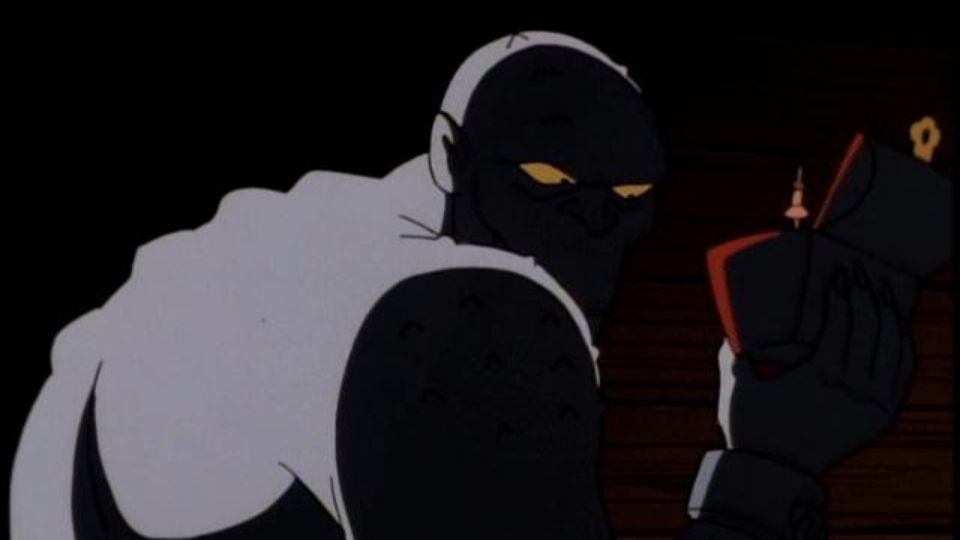 Avatar aired 9 May, 1994, and sees Batman traveling to Egypt with Talia (Helen Slater) to hunt down her father, Ra’s Al Ghul (David Warner) who is on the hunt for an ancient source of power.

Lucius Fox (Brock Peters) makes a welcome appearance and so does Nichelle Nichols as Thoth Khepera.

This episode really engages in its art-deco 30s-esque setting, outfitting Wayne in a fedora and linen suit, and then while hunting in Egypt for Ra’s, the flared pants and boots of the time. It’s definitely a fun adventure.

Eluding traps set by Ra’s they soon discover there is terrible danger around them in the form of Thoth, an ancient evil, that attempts to feed on all of them. Bats tries to hold off the creature while Talia escapes with the drained Ra’s, but Thoth may still be down there, waiting…

The downside to the episode is that not enough time is given to Talia and Bruce’s relationship, so that when she chooses her father over him at the end of the episode, it doesn’t quite have the emotional kick it should.

That being said, I do enjoy when Talia and Ra’s show up in this series.

A Gotham city D.A., Janet Van Dorn (Stephanie Zimbalist), who hates Batman, is forced to defend him when she and the Caped Crusader are captured inside Arkham, and put on trial by the inmates with the Joker (Mark Hamill) serving as the judge.

Bruce tries to convince Janet that Batman isn’t so bad, but the moment doesn’t last long, as she gets grabbed, and Batman gets captured in his attempt to rescue her.

The trial is funny, but to the point, as the argument is that none of these criminals would have been created without Batman, so it’s his fault. Van Dorn makes a convincing presentation defending her client, and she tears them apart one by one.

But does that mean that Batman will be found innocent?

This is just a great, and fun episode, the trial carries on while Batman waits out the arrival of Gordon (Bob Hastings) and Montoya (Liane Schirmer). But will they arrive in time? And what will the jury’s verdict be? and will it make a difference to the criminals?