As I continue my time with the Dark Knight via the Sci-Fi Chronicles book, I think it was after Batman Returns that someone at Warner Brothers wanted to get away from the darker, more adult ideas Tim Burton’s films were starting to introduce and perhaps push the series in a more ‘family-friendly’ way.

Enter Joel Schumacher, and buckle up as the batmobile goes right off the rails into splashy colours, and goofiness, leaving welcome neo-gothic overtones of the earlier films behind. And while Tim Burton produces this one, I can’t see him being happy with the final product.

A terrible plot, some horrific acting on behalf of some day players, horrendously cheesy dialogue and way too many gadgets (and let’s not forget, nipples on the bat suit, and a bat suit butt shot), this film is rancid. And Carrey seems to suffer the worst of it in terms of the costuming, by film’s end he looks Dame Edna.

All of these things overshadow some of the cool work done behind the scenes by John Dykstra and Rick Baker, as well as a fairly solid performance by Kilmer, though I really don’t like his take on Bruce, or some of the jokes he’s forced to spout as Batman. 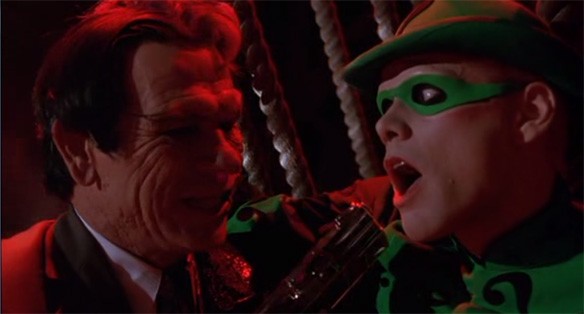 The plot, such as it is, sees Edward working for Wayne Enterprises, and has designed a device to manipulate brain waves, and increase his own intelligence by sapping neural energy. It also, somehow, gives him the ability to pick out images and secrets from people’s mind. Like, who is Batman?

He partners with Dent to steal the cash he needs to build his machine, and the two have designs on controlling all of Gotham. But Edward can’t help but taunt his old boss with riddles.

Grayson gets pulled into it, when his trapeze act family are killed trying to get rid of one of Two-Face’s bombs, and he is taken in by Bruce. Which is weird, because how old is Dick supposed to be in this film? He seems to old to need social services or the like, which seems to be the driving force between throwing him and Bruce together.

Now driven by the need for revenge, Dick tries to go after Two-Face, but Bruce warns him off, until the two of them can work together as partners, and Bruce can get his love life with Chase figured out.

After the dark world Burton exposed to us, this just feels gaudy and silly.

But guess what… it’s about to get worse!