James Garner brings the enduring, funny, occasionally cowardly ex-con (having served 5 years for armed robbery, though he’s always maintained his innocence, and was pardoned) turned private investigator Jim Rockford, in this pilot episode for the much-loved series, The Rockford Files, which aired March 27, 1974.

Lindsay Wagner stars as Sarah Butler, a young woman who is looking for the person who murdered her father, but the police closed the case, thinking it’s simply an open and shut case. However a cop in the precinct, Dennis Becker (Joe Santos) recommends Rockford to her. He initially agrees to take the case, and the promptly quits when he learns that she can’t afford his $200 a day plus expenses, even though she offers to pay him on a weekly installment plan of $25 a week. He starts and stops covering the case as he gets deeper and deeper, coming up against dead ends that cause him to quit, before something happens along to make him reconsider taking it on again.

When a vicious thug, Jerry (William Smith) begins following him, Jim outwits him and shows he’s not afraid of fighting dirty by spraying the floor first with hand soap to keep Jerry off-balance before popping him one with his fist around a roll of quarters. 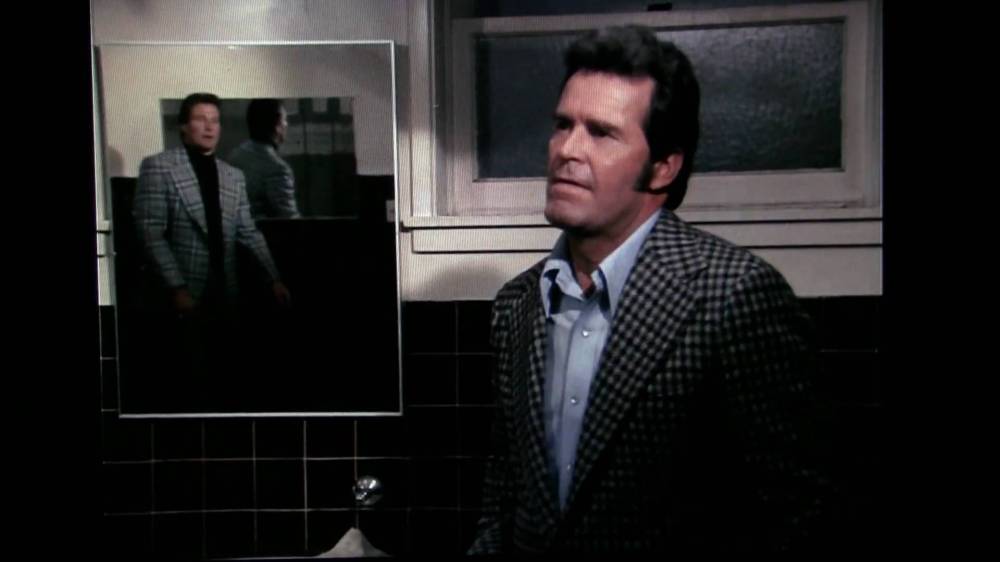 He’s happy to let his mouth get him in and out of trouble, and poses as a Dean of Admissions at one point as he chases down a tentative lead.

All the familiar trappings are here, the humor, the charm, and the spirit, the trailer, that let the show run for 6 seasons and television movies. Even Angel (Stuart Margolin) is there from the get go.The only bit of casting that didn’t survive the pilot is that there is a different actor playing Rockford’s father, Rocky. For the remainder of the series, that very fun role was taken on by Noah Beery Jr. This time around, Robert Donley has the pleasure. Donley does all right, but Noah truly makes the character and has such a joyous chemistry with Garner. And of course, the Pontiac Firebird is right there.

The only thing really missing is the iconic answering machine bit which opened every episode with a fun message of some sort, never really related to the plot, but just a glimpse into Rockford’s life.

The theme though, created by Mike Post and Pete Carpenter opens the show, and reappears a number of times through the run of the episode… and it’s so very whistle friendly!

Created by Stephen J. Cannell, this show not only entertains, but fills me with nostalgia. I can remember coming down the stairs of our house in Borden, Ontario, as the theme would come on. My dad didn’t really watch a lot of tv, in fact, there wasn’t a lot of family shows I remember watching together as a family, there would be the Muppets, the weekly Disney show, M*A*S*H*, but I don’t remember my dad ever missing The Rockford Files.

I can remember sitting on the couch, not always understanding what was going on, and no doubt, never able to stay up for the entire episode, but quite liking Garner in the role.