That Mr. Moffat is what I call a Doctor Who episode to celebrate. While I wasn’t a big fan of the second half of series 7, there are moments and bits I like, just overall, it wasn’t the best, THIS showed what Doctor Who can be in the best way!

From the opening shot of Totter’s Lane, meant to put us in mind of the first episode of the series, to its final moments when 11 (Matt Smith) speaks to a very special Curator. This was an episode to be enjoyed.

I was a little worried when it seemed the main story would follow a Zygon invasion of Earth (a villain who hasn’t been revisited in nearly 38 years), even though it featured 11 and 10 (David Tennant), but the way it weaves in and about, including the War Doctor (John Hurt) especially in the last half of the special, I was hooked. There are payoffs, nods, homages, and the entire special is filled with treasure.

I love the War Doctor’s story, fighting in the last great Time War, something we’ve only heard about, and only seen the repercussions of. We join the War Doctor on Gallifrey, as 11 examines a 3-Dimensional painting (Time Lord art), the dual titled “No More” and “Gallifrey Falls.”

The War Doctor has broken into the archives and stolen the ultimate weapon, The Moment. A weapon we, as viewers, know he’s used, wiping out the time lords and all of Gallifrey (2.47 billion lives) as well as the ever-menacing Daleks. However on activating it, an Interface is created, one that takes the form of future companion Rose Tyler (Billie Piper) and refers to herself as Bad Wolf.

As he debates on whether or not he should activate the weapon Wolf brings 10, 11, and WD together in the 16th century, where the Zygon invasion has begun under the reign of Queen Elizabeth I (Joanna Page) and her unlikely husband (so much for timelines). 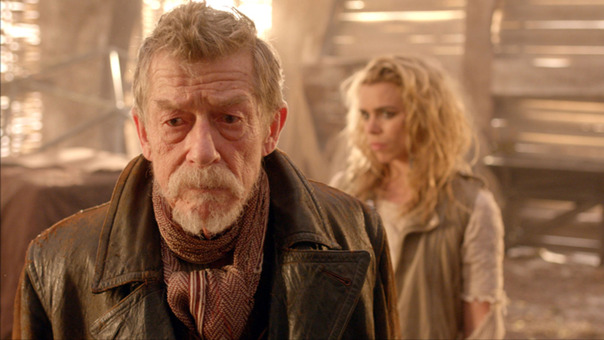 There the three Doctors, overseen by Wolf, and joined by the resourceful Clara (Jenna Coleman), verbally joust, and chatter back and forth, in a delightful way, that overlays the painful reality that WD’s actions created the Doctors who follow him.

As they tackle the Zygon invasion (love the idea of those 3D paintings), we get to meet Osgood (Ingrid Oliver) with a very familiar scarf, we get the briefest of looks at Peter Capaldi’s Doctor (to delighted gasps and applause in the cinema) and we get to see the Doctor save the day.

This was sharply written, beautifully filmed, the 3D in the cinema presentation was amazing, especially the shots over London with the UNIT chopper carrying the TARDIS, and it embraced things I love most about the Doctor, story, characters I love, hope, and a sense of fun, even if there is darkness underlying it. 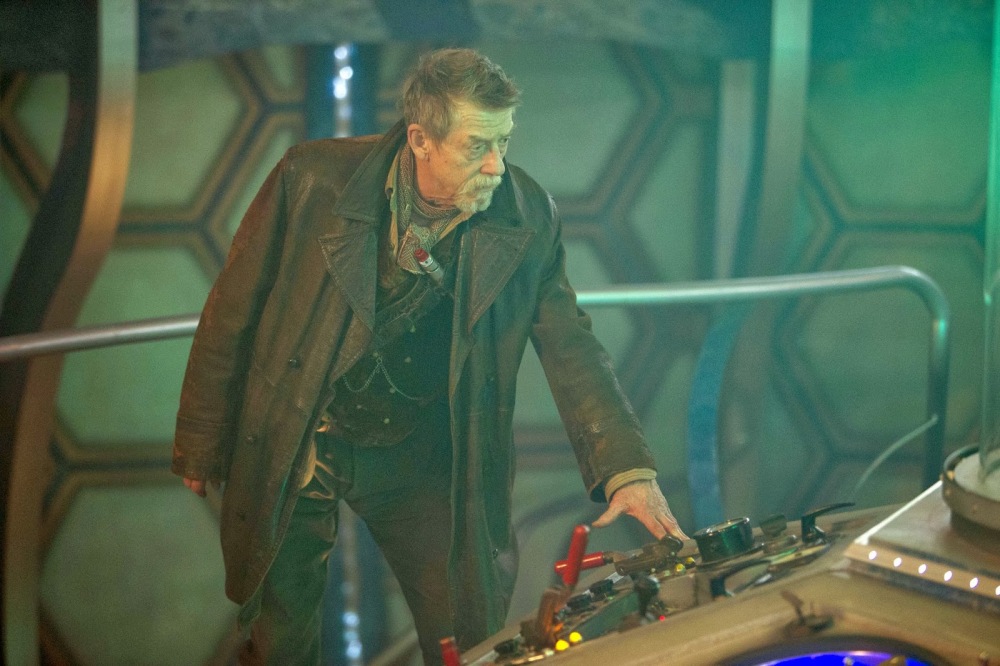 John Hurt is a worthy addition to the pantheon of Doctors, and I sincerely hope we get to see more of him, even though we see his regeneration into 9 – also I love his desktop setting of the TARDIS console room, the fact that he carries his sonic (a dark red) on a bandolier, and that he seems so weary and initially unwilling to put up with what to him appears to be the sheer buffoonery of those who followed him.

Every character is given their moment, 10’s reaction on hearing the name Bad Wolf is almost heartbreaking, 11’s inability to talk without waving his hands or walking by a fez, the pure essence of WD, Clara’s belief that there has to be another way…

And the final moments of the Doctors standing, iconic, looking up at Gallifrey.

This is a worthy episode.

Yes, we know that Tom Baker’s Curator cannot possibly be 4, as we saw his regeneration into 5, but seeing him return to the universe, and interacting with 11, I was misty-eyed. Watching 10 leave, alone… and giving 11 a true purpose…

Things have changed in the Who-universe, from here on out, we know that Gallifrey is out there somewhere, frozen in time. What happens when we find it? Will it be filled with the arrogant Time Lords we encountered in The End of Time, will 11 or 12(?) be able to find them, redeem them, and restore them to what they once were?

I like this repositioning. It hasn’t changed anything that has gone before, it simply sets up, beautifully, the journey ahead.

There were too many moments to count of people gasping in delight, clapping in joy, and wet eyes to count, and it was a wonderful presentation. I can’t wait to watch it again, but part of me is thinking about going all the way back to Totter’s Lane, and starting the amazing journey all over again. 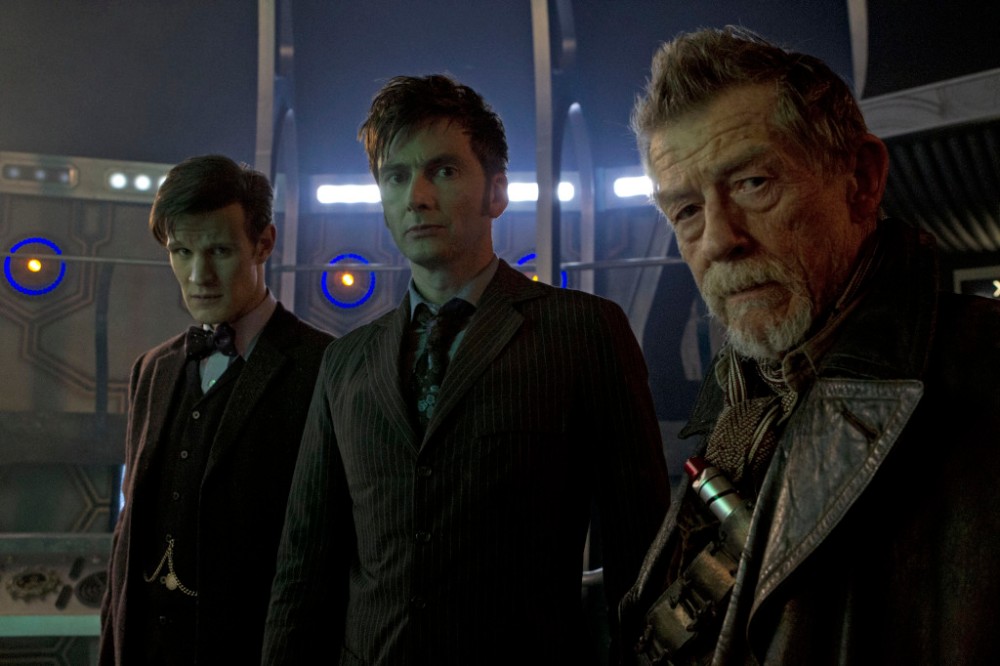