Great Movies – 100 Years of Film has brought me the next title and its recommendations in the comedy section, and I know I’m going to enjoy this bunch… It’s time to revel in the antics of the Marx Brothers!

I’ve yet to come across a modern-day film that fills me with such joy as listening to Grucho’s wordplay in any of his films. The dialogue often had me laughing aloud, and thaty coupled with the scene in the stateroom when everyone keeps piling into it, made this one totally worth it.

This time around, the boys take on high society, as Groucho portrays Otis B. Driftwood, a schemer who’s trying to mooch off of Mrs. Claypool (Margaret Dumont). Seeing an opportunity to get some money from her, he introduces her to a opera company director, but gets cut out of the deal.

Stuck, he meets up with Chico who plays Fiorello, a wannabe talent manager for tenor Ricardo (Allan Jones), who can’t seem to make any headway in the opera world because of Lassparri (Walter King) a top-rated performer who has his eye on Ricardo’s girl Rosa (Kitty Carlisle) a very talented performer in the opera. 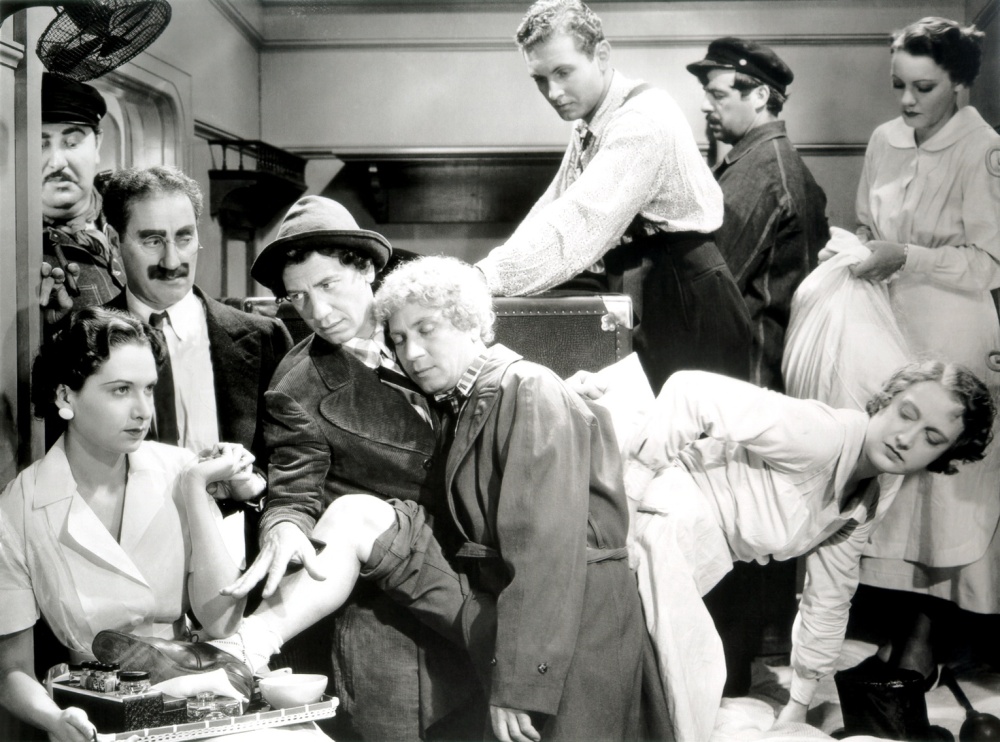 When Lassparri fires his wardrobe master, Harpo as Tomasso, and takes a voyage to New York to set himself and Rosa up on the stage there, things get wacky aboard ship, as Tomasso, Fiorello and Ricardo all sneak aboard in Driftwood’s steamer case, which leads rapidly into the but-gusting stateroom scene.

There were a couple of moments that I felt brought the film to a grind halt, the musical numbers. Each time one happens, it brings the film almost to a complete stand still, it’s only the knowledge that they can’t last forever, and that it’s bound to be followed by a comedic moment that got me through them.

My favorite of the brothers has always been Groucho, but Chico and Harpo both get great moments as well. Harpo puts Lassparri out a number of times, with blunt force head trauma, and his first appearance in costume is pretty hilarious.

Chico is wonderful at turns of phrases, but watching him and Groucho decide what to take out of a contract it brilliantly comedic.

They just don’t make movies like that anymore. There are a lot of laughs, whether through word play, absurdity of the situation or the physical comedy that one comes to expect from these wonderful performers, and I was delightfully entertained!

There are somee great moments, the introduction of the three aviator characters was a little head-scratching, but pays off brilliantly, when Chico talks about flying halfway across the ocean, then running out of gas and having to fly home, not to mention the remark about their being aviators and travelling by ship.

This one was so much fun, and makes for a nice segue into the next bunch of comedy titles in this section of Great Movies – 100 Years of Film, which will see me settling in for 5 more Marx Brothers films, some I’ve seen, and some that are brand new to me.

What’s your favorite Marx Brother? Or fave moment featuring them?