That’s what Warner, DC Comics, Christopher Nolan and Zack Snyder have served up.

I love the character of Superman! I’ve got comics piled in my apartment featuring the familiar red cape and blue suit, I liked Superman Returns, there are even moments in III that I enjoy (even I won’t touch Quest For Peace). So I was pretty much guaranteed to be in a seat opening weekend to see the latest return of one of my heroes.

Spectacle in service to a story makes it epic, spectacle for spectacle’s sake serves no purpose in a film, if it isn’t moving the characters and story forward then it’s a waste. The entire second half of the film feels like exactly that. A waste. The film is over-saturated with CG and spectacle trying to make itself epic, that does nothing but distance the viewer from it, because there is absolutely nothing ‘real’ on the screen, be it story, actors, sets. 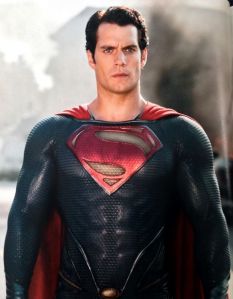 One could hang all the blame on Snyder, but there’s enough to go around, seeing as Christopher Nolan and David S. Goyer, who so recently finished with the Batman property penned this film.

And I’ll be honest, early on, I was being swayed by the film, there are some really nice character moments, Lara (Ayelet Zurer) lamenting sending her son away, never being able to see him grow or take his first steps is wonderfully heartbreaking. Russell Crowe as Jor-El brings the necessary gravitas to the character, and I actually prefer his interpretation of the character.

Things I was worried about like Kevin Costner as Jonathan Kent were put completely at ease as he imbues the character with an authenticity lacking in a lot of the others on the screen.  Diane Lane brings the same reality to her Martha Kent, and I always enjoy seeing her on-screen.

Clark (Henry Cavill) saving a bunch or oil-men on a burning rig was excellent, he’s howling as he holds a piece of the structure intact to allow for a helicopter escape, but it’s straining him… he has limits. 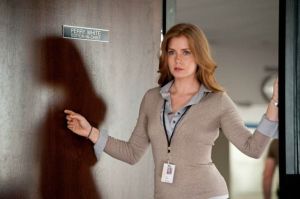 His comment to Lois Lane (Amy Adams) about why he let them put the handcuffs on them, despite their ineffectiveness.

These are all things I like (as well as a very familiar Lexcorp logo).

Michael Shannon’s Zod could be a monster, it’s hard to tell, because once the second half of the film kicks in, it’s all shakey cams and no story or character development.

At this point in film, if you’re going to give me an action sequence, I’d really like to see it, not think I see it, as cameras shake, whip/pan, or zoom in on a surprising piece of action (which isn’t because it was CG-created in the first place).

Amy Adams will always have a fan in me, I adore her, but she’s not given enough to do as Lois, she gets a few early digs in, but then all of it gets shoved aside the moment she lays eyes on Clark. Now she’s no longer a strong character, she’s mostly just a damsel in distress, even when she’s escaping from Zod’s ship. 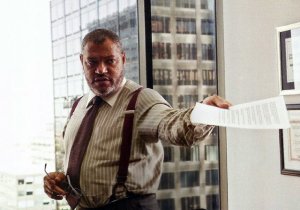 Laurence Fishburne’s Perry White gets to wander through a couple of scenes, but once again, his star power is wasted.

It’s as if the studio wanted to stack the deck with A-Listers, which is fine, but if they aren’t given anything to really do, you’re wasting them.

Then there’s all the problems I have with the film… Even the council of Krypton, at this point, no longer the jewel it once was, it’s core has been mined, and the entire planet is on the verge of collapse, seem to think carrying on with business as usual is the way to go, debating endlessly instead of saving the people. Something both Zod and Jor-El want to do. It’s also ridiculous that they send Zod and his men to the Phantom Zone on the eve of the planet’s destruction, ensuring their survival but wiping out the rest of the planet. Good planning.

Speaking of business as usual, I don’t know about you, but if we, as a species learned that we weren’t alone in the universe, and an alien on our planet had 24 hours to turn himself over to these visitors, I wouldn’t be going to work like everyone else in the film seems to be doing. I’d be trying to see what was going on.

And that’s just the beginning of my problems. Zod wants a new Krypton, fine, Kal-El could give him some of his blood (wherein lies the hidden Kryptonian Codex) and let them terraform Mars to their purposes. They’d probably survive just fine there. Krypton restored, and we’d have neighbors. But no, let’s threaten Earth, because otherwise there’s not much to hang a story on…

I mentioned to some of my friends that I was also worried about Hans Zimmer scoring the film. I was coming around slowly to it, in fact, it may end up being one of my favorite parts of the film, but much like the film, there’s nothing epic, nothing grandiose, no musical personification of a higher ideal to stride for like John Williams original score. I’m not saying they should have used Williams’ themes, but there should be a strength, a power behind it, something to strive for, but it’s not there.

It actually works for the film.

Cavill is good as Clark, and I think given a proper script, one with a story, his Superman could be really quite good, and I liked seeing him don the glasses at the end, despite the fact that at least one person at the Daily Planet heard Lois call him Clark while he was in costume (not to mention the military), but I guess the tie and glasses can hide all manner of sins.

Neither Snyder nor Nolan & Goyer are complete hacks, they’ve all done some fantastic work on other projects, and the flashback sequences in the film are amongst the best on film for the Superman mythos, including Jonathan stopping Clark to protect his secret, or the briefly touched on Superman/Christ connection, played out in a church no less.

But the rest of it…

But even the flying. Yes it should be fast, but it should also be a thing of joy and beauty. There are some wonderful moments in Superman: The Movie all because of the flying, but here, once again, like everything else, it seems completely wasted, and certainly not enjoyable.

Instead I settled in to pick out all the other cool folk who appeared in the film, like David Paektau (Flashpoint), Julian Richings (The Last Will & Testament of Rosalind Leigh), Tahmoh Penikett (Bomb Girls), Alessandro Juliani (Continuum), Harry Lennix (Dollhouse) and Richard Schiff (The West Wing).

The sequel has already been greenlit, I can only hope they actually give us a strong story next time around.

Maybe it will be about the rebuilding of Metropolis, because I’m sure FEMA isn’t going to get in there and do it, maybe Lexcorp?

Jor-El talks about how Kal-El will give humanity something to strive for, a set of higher ideals to meet.

I wish he had done the same thing with the filmmakers.

Did you see it? What were your thoughts?