I’ve written about Bomb Girls since it started.

I’ve let these people and their creations into my life, and if I’m completely honest, into my heart. We’ve only spoken to them briefly, shared short moments of time over the past year and half, but our shared love for the Bomb Girls series has made them, to my thinking, more than acquaintances, more than people Sue and I have talked to, I consider them friends.

And I don’t want to say goodbye to them, or the world they’ve created. And to be clear I can and do separate the art and the artist, even when they are woven together as intrinsically as those involved with this show are. No one else could play any of these characters. No one. Each one of the amazing actors on this series breathed a unique and individual life into every one of these incredible creations.

So I don’t think I’ll watch the season/series finale yet.

I prefer to know that I will always have one more episode of Bomb Girls to watch.

Now should Global renew the series, always an 11th hour possibility, or give us a television movie to wrap things up properly, then yes I may very well finish it.

Instead, I’d rather think about what the past year and a half has given Sue and I in relation to Bomb Girls.

Our first interviews with all of them… Jodi Balfour’s (Gladys Witham) crisp and lovely accent over my computer speakers as we conducted a Skype interview with her, I’ll always remember and smile at her perfect elocution of the words ‘literature’ and ‘Timothy.’ Jodi is brilliant. And of course she made me blush.

Something everyone of the Girls did.

Ali Liebert (Betty McRae) in our first interview blatantly accused me of being an easy blusher, but perhaps I just liked the attention from these wonderful, and stunning women. Honestly, just talking with her on the phone, I knew she would be one of the coolest people ever you could meet in person (I was later proved right on this count).

And Charlotte Hegele (Kate Andrews). Charlotte will always hold a special place in my heart and Sue’s. She was the first Bomb Girl cast member we met in person; agreeing to meet us at a Starbucks. She walked in, and I swear she could have stepped out of a 1940s film. You think she’s amazing on the screen, wait until you see her in person.

Bless her heart, she even came out to chat with Sue and I while she had a cold. She was undeniably nervous about meeting us, but most people were when we first started out, no one knew who we were. But Charlotte warmed up to us by interview’s end, and it was a fantastic evening.

Then, Sue and I decided to take a chance, we contacted Shaw (who did amazing work to connect us, and give us some wonderful keepsakes) and wondered if there was any possible way Meg Tilly (Lorna Corbett) would have time for a phone interview with us as we closed in on the season finale of season 1.

And she said YES! Apparently she’d seen what we had been doing with the other girls, had read the reviews, and realized that both Sue and I had a genuine passion for the show. So she agreed. 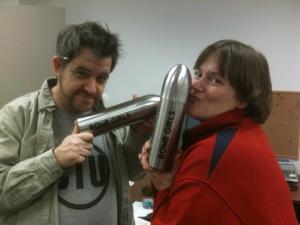 Through the entire interview, Sue and I kept gesturing at the phone speaker and mouthing the words, “Oh my god, we’re talking to Meg Tilly!”

We chatted with Janis and Adrienne from Back Alley films… they helped create the series and produced, wrote and directed for it as well.

An unlikely source put us in touch with the other series creator, Michael MacLennan… My sister, best-selling author, Tanis Rideout (Above All Things) knew him, and passed on part of an email he’d written once he learned she and I were related.

He readily agreed to meet up with us for a chat.

You see how it was so easy for us to start thinking of these people as friends?

Sue and I waited with bated breath for the announcement of filming for Season 2, because we had started pestering them about a set visit the moment we heard they’d been given a second season.

The day finally came (wouldn’t you know it, they were filming the season 2 finale… so I have seen part of it!), and Sue and I lost ourselves on the sets, chatting to people, hugging Charlotte (who was playing a difficult scene that day), meeting Ali in person (SO COOL!), interviewing them both as well as Micheal Seater (Ivan Buchinsky). We got to say hi to Adrienne and Janis, meet so many amazing people, and wander the Vic Mu bomb floor, the canteen, the Moretti kitchen, hang out in Bob and Lorna’s house, see Betty’s bedroom…

For Sue and I that was one of THE most amazing days, and admittedly we have had a number of them since this blog has started, but that one will always be so important to both of us I think.

This was not just Canadian television, this was brilliant drama, perfectly sculpted, raising the bar for primetime dramas not just here at home, but all over the planet!

So, you’ll forgive me please if I don’t want to quite let it go yet, that even if I did watch it, I would be in no condition to share my thoughts on it. I’m a sensitive guy, fine. Whatever. The point is, this show spoke to me, as it spoke to millions of others, giving us flawed but strong characters that we were happy to have in our living room week after week. 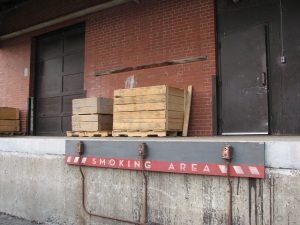 To be clear, it’s not like I haven’t tried to watch the episode, I’ve actually started it no less than 3 times, but everytime the voice and graphic says ‘Previously on Bomb Girls,’ I just have a flood of denial, turn it off, and have to leave the room.

So I’m sorry if I let you down by not writing about the final episode of the series, I know a number of fans, and even those on the show have read what I have had to say about it.

But I’m going to be selfish about this.

To know as the episode ticks by that each scene may be the last time I get to see a character, leaving them in a war that we know will last for another 4 to 5 years yet? Not to mention what happens to them all after the war?

It would feel like I’m abandoning them when they may need me most. (Yes, I know it’s just a TV show, but I become highly attached to the shows I do watch, if this post didn’t clue you into that).