“When people substitute fear for reason…” I think that line may have just as much resonance today, if not more so, than it did in the 1950s when Robert Wise’s (Sound of Music, Star Trek The Motion Picture, The Haunting, West Side Story) sci-fi classic first debuted, and earned its place on the list of 101 Sci-Fi Movies To See Before You Die.

Admittedly the Christian allegory is kinda heavy, but it still has an important message… we’re only one little planet, distracted by our own petty squabbles… what happens when our neighbors call the cops on us for being too unruly?

We’ve leapt past the point of being able to destroy ourselves, we can not only wipe out every person on the planet countless times over, we can destroy our entire planet. That makes us a threat not only to ourselves but any intergalactic neighbors we may have. 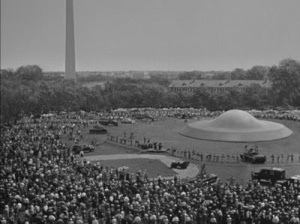 That is what’s at the heart of this film as well (forget the remake the only good thing in that film was Jennifer Connelly and Jon Hamm), Klaatu (Michael Rennie) arrives in Washington in a very public saucer landing with his imposing giant of a robot, Gort (Lock Martin) in tow. He announces that he comes in peace. Klaatu has come a long way to deliver an important message to all the people of the planet.

After a less than appreciative welcome by the armed services – he gets shot – Klaatu escapes the hospital he’s held at, and decides to pose as a common man, named Carpenter, and rents a room.

It is here that he studies American society up close as people worry, panic and spread rumours about an imminent invasion.

But not everyone is lets their fear control them, Klaatu meets Helen and Bobby Benson (Patricia Neal and Billy Gray). It is through Bobby’s humanity, his intelligence, that I think Klaatu realizes that we’re not all bad.

When he’s denied a meeting of the leaders of the world while in hospital, Klaatu approaches the brilliant scientist, Professor Barnhardt (Sam Jaffe) to unite the scientific minds of the world for him to speak with.

Unfortunately, Helen’s potential suitor Tom (Hugh Marlowe) learns that Carpenter is Klaatu in disguise and calls in the troops, even as Helen and the visitor race to the meeting. 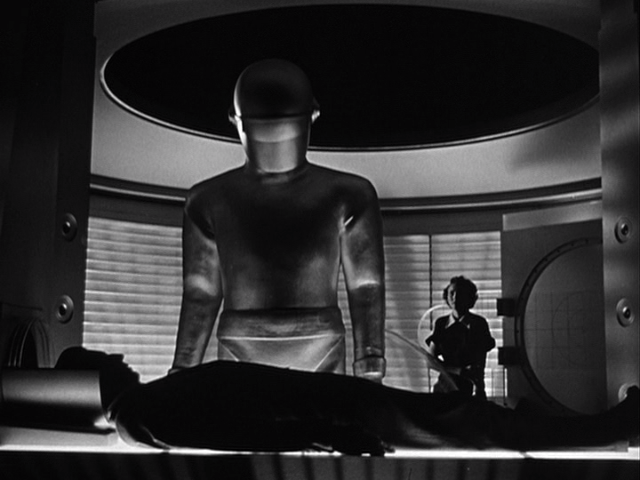 Klaatu is shot, dies, and then is resurrected by Gort (albeit temporarily) to deliver his warning, shape up or be punished, before ascending to the heavens. (Now that sounds familiar…).

While some of the film is a little dated, as I rewatched it, a lot of it felt so immediate and relevant – The need to control what we don’t understand, and if we can’t control it, better destroy it! Ideologies that only seem to concern themselves with allowing one to get ahead, economically or powerfully, on an individual level, instead of seeing a bigger picture.

It’s movies like this that make me stand on my balcony and look up at the stars in awe, to look at Curiosity’s pictures from Mars, and realize that we can be so much better. Sure we have some growing up to do, but it’s time to put aside some of our childish things, and start to accept responsibility for what we’ve done to ourselves and our planet… especially before we go knocking about on another one, or maybe the neighbors will show up, and they really won’t be happy…