How are we possibly at the end of the first season of this amazing show already?

I was hooked from the get go, and not once, did Aaron Sorkin’s brilliant HBO drama steer me wrong, and it got me thinking and questioning. Even when it comes to some of my own posts. So I thank the show and Mr. Sorkin for that.

This week’s episode runs from August 1st to the 8th of 2011. Mackenzie MacHale (Emily Mortimer) and Lonny (Terry Crews), Will McAvoy’s (Jeff Daniels) producer and bodyguard respectively, find Will in his bathroom sprawled on the floor, covered in blood.

Rushing him to the hospital the diagnosis is a perforated ulcer, brought on by his drinking, his antidepressants (which Mac didn’t know about) and most importantly the hatchet job Bryan Brenner (Paul Schneider) for the New Yorker.

He’s been wallowing, and wondering if maybe the article is right.

Sloan (Olivia Munn) has been approached to leave the show and join Venture Capital. Neal (Dev Patel) is still running down the death threat against will by the troll.

Nina (Hope Davis) confronts Mac with a story she’s waiting on a second confirmation for – that Will was high during the Bin Laden podcast.

Most importantly, Charlie (Sam Waterston) goes to see Hancock (Stephen Henderson) about his public credibility in regards to the NSA, phone hacking and the Global Clarity project. Sadly, all the information they’ve gotten, and as Hancock points out, has been given, puts him in a bad light. They can’t use him as a reliable source. Charlie pleads with him to give him the information so they can go with the story, but Hancock won’t do it without his help.

Don (Thomas Sadoski) seeks out Sloan’s advice on asking Maggie (Alison Pill) to move in with him. Through the course of the conversation we learn that Sloan would’ve gone out with him, if he had asked.

Jim (John Gallager Jr.) and Maggie have a great moment, after Maggie and Lisa (Kelen Coleman) have a blowup over Jim. He’s on the Sex & The City bus tour, to learn more about Lisa’s favourite show, and Maggie rails against the bus when it stops, yelling at them that Carrie Bradshaw is NOT your average New York girl, because she is. Jim takes off after her, and they finally have their kiss.

He’s also a good guy, he’s with Lisa, and she’s with Don, so he walks away.

When Charlie learns that Hancock took his own life, and has a sealed envelope delivered to him, he’s determined to get Will back in the studio.

With the help of Will’s nurse, he motivates Will with a story, and they all head to the studio to put the story together.

First however they go meet with the Lansings (Jane Fonda & Chris Messina). They confront Reese over the fact that he gave the order to hack their phones, the only way they could have gotten the story that Will was high. 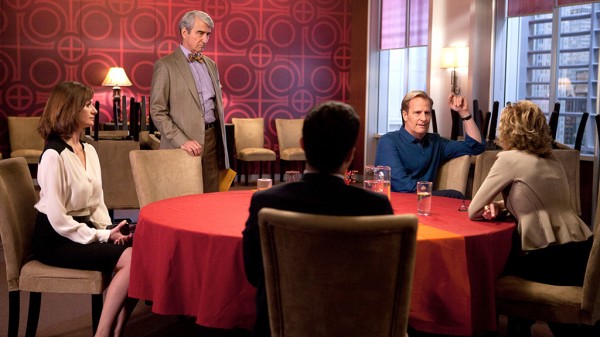 Leona Lansing is outraged, and finally relents, telling Will if he’s going after the Tea Party and Conservative Republicans that he better not miss.

The Newsroom team, has been doing research all week, and they lead with the story of Will’s nurse’s grandmother, Dorothy Cooper.

This puts a very human face on the passing of a new law, the Voter ID law. A law that Republicans proclaim will help control voter fraud, a huge issue apparently, because there were only 86 cases of it during Bush’s election. Not 86, 000 – 86.

So they are taking away voter rights for people who have been voting for years, all because they don’t have a driver’s licence… I don’t either, I don’t have a car, or a passport, I do have that, because I do like to travel, what if you don’t… why would you get one?

So Dorothy, has been voting for 75 years, but now, with this new law, she can’t vote anymore. This seems to be nothing more than a Republican scare tactic, and a chance to control votes, plain and simple. 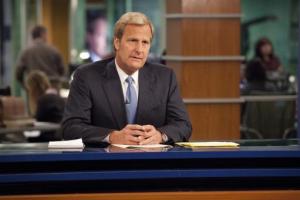 From there, Will, during his broadcast, brilliantly takes the Tea Party and Conservative Republicans to task, by refuting all of their ‘factual’ talking points one by one.

And he leaves the best one for last…

The concept that the United States was founded as a Christian Nation… saying the Founding Fathers would be so disappointed by the state of their country. I’m sure they would, just not in the way they would think…

Will has his team compile a lot of quotes from them, including this awesome quote from John Adams in The Treaty of Tripoli… “As the government of the United States of America is not in any sense founded on the Christian Religion…”

Yet, according to the Tea Party all of the founding fathers say it was a Christian nation, which then allows Will to talk about Christian beliefs, and how they really aren’t in line with the Conservative and Tea Party beliefs. In fact, they seem to love America, but hate Americans.

He calls them out, on their refusal to accept facts, denial of science, attempts to control voting, women’s bodies, and moving the country away from the one he loves to something he doesn’t recognize.

I love this show…

As the show closes out its first season, we get two nice call backs to the first episode, Mac reveals she was in the audience, that Will wasn’t in fact hallucinating, and that the young girl, who asked the inane question which led to his rant, has applied to be the new intern.

She too wants to be The Greater Fool.

I got a little choked up about that. It’s through people taking actions like the one in this episode that will make the difference, people out there taking a chance to tell the truth, to share the facts, to be objective.

Season 2 is a long way off…

Come back soon Will McAvoy, we need you, and more actual reporters like you, ones that aren’t buried by corporations, advertising, or info-tainment – those reporters who are getting the ugly truth out there.

But that’s only half of it. Because we have a responsibility, as the general public, to be informed, to make the best decisions from the facts provided, the facts, not the company line.

I don’t care what party you are, but remember to look at it objectively, don’t simply kowtow to them, because they’re your party, listen to what is actually being said, all sides, not just one.

Enough soapboxing, I just love how this show gets me going.