I missed out on doing a post last week for Game of Thrones Episode 5 because Sue and I were hip deep in the awesomeness that is Hot Docs.

So this evening, I sat down and worked my way through two episodes back to back to catch up on all the scheming, betrayal and murder…

In what would’ve been the season finale for most shows, Renly is assassinated by Melisandre’s shadow creature in the opening moments of episode 5 as Catelyn and Brienne watch in horror. Being blamed for the attack, the two are forced to flee the camp and make their way north, where they rejoin Robb in his camp, just as Robb is obviously beginning to fall for Talisa.

Catelyn gently reminds he is already promised to someone. Robb and his company react in horror and anger when they receive news that Theon Greyjoy has seized Winterfell.

In Winterfell, Bran is suffering still from his dreams of the three-eyed raven as well as the belief that the sea is coming to Winterfell… Which it does when Theon shows up, and in taking the keep he beheads Rodrik in front of Bran, despite the young boys pleas.

Osha seduces Theon to aid Bran in his escape from Winterfell. They escape into the shadow of night , with Bran’s dire wolf in tow.

In Harenahal  Arya is serving as Tywin Lannister’s cup-bearer, listening to everything that is going on, and ends up hiding in plain sight when Baelish shows up to confer with Tywin. Little-Finger comes with news of the possibility of making an alliance with Loras and Margaery Tyrell now that Renly is dead.

Arya comes across Jaqen the prisoner she freed now in serving as a Lannister soldier. He tells her that with the escape she helped with in freeing himself and his two fellow prisoners, he owes her three deaths.

She has her first one in moments, choosing The Tickler, the man who tortured the people of Harenhal. He shows up with a broken neck, and his head turned completely around.

She’s pressured into her second choice when having stolen a missive from Tywin’s books with word of her brother, a Lannister soldier stops her. Before he can inform on her, she arranges his death.

Jon Snow and some fellow crows head out on a seek and destroy to wipe out a small camp of wildlings who are keeping an eye on them from a distance. Arriving there they quickly dispatch all of them but for one, whom Jon discovers is a woman, Ygritte. Using the moment of indecision the woman flees, with Jon in pursuit, but through the chase, Jon loses track of his men, and the two are left in the frozen wild alone. 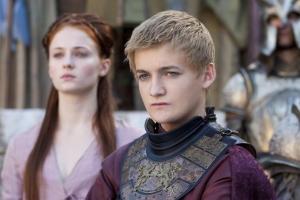 In King’s Landing Tyrion discovers that the alchemists are making a dangerous concoction known as wildfire, he tells the alchemist that they are no longer making it for his sister Cersei, but now work for him.

He has also arranged for Myrcella to be sent away to be married off in Dorne. On their way back, the peasants hungry and angry, attack the King’s party, and Joffrey orders them all killed. The mob literally rips some of the party apart, and Joffrey flees, leaving Sansa to the crowd.

About to be raped, beaten and murdered, she is rescued by The Hound, who quickly, and brutally dispatches her attackers, returning her safely, though bruised and bloodied to the castle, where the only person who expressed concern over her is Tyrion.

In Qarth, Dany wonders what her next move will be, and is warned that her adviser, Jorah, may have more than feelings of loyalty for her, which she doesn’t believe.

Instead, she focuses on trying to barter for a ship, or ships, to take her across the Narrow Sea to Westeros to reclaim the Iron Throne. But which ever way she turns, she is met only by traders who want the money first, or whatever else she may have on offer.

The last moments of episode 6 sees Dany returning to the house afforded her in Qarth to discover her that many of her people have been murdered, and her tiny trio of dragons have been stolen!! 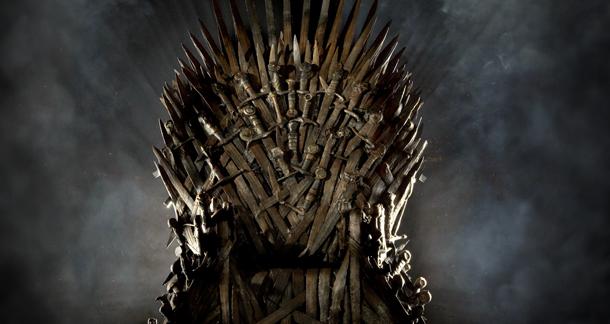