My thoughts spun off their axis for a while last night, and circled back around to the idea of top ten lists. We tend to love lists for some reason, and as my eyes raked my collection of films, I decided to throw together my list of favorite time travel films, or if not necessarily time travel films, then films that play with the concept of time. I know there are already dozens of such lists out there already, but these are mine. 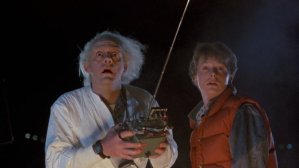 1) Back To The Future Trilogy – This fim series is one of my all time favorites, and I never tire of it. From Marty and Doc, to the score by Alan Silvestri, there isn’t a piece of this series that I don’t like. Am I always in the mood for Parts II & III? Not always no, but I do love the first film to no end. It’s the tomato soup and grilled cheese of movies, one of my ultimate comfort foods. This trilogy came along at just the right time in my life, and as I mentioned in a previous post, I so wanted to be as cool as Marty McFly was. And a time-travelling DeLorean? How cool is that?!?! There’s only one thing that’s cooler as a time machine, but that was in a tv series… a police box! Who wouldn’t have wanted a friend like Doc Brown? I still do! And I love the fact that when Marty visits the diner in the 50s and starts asking for drinks like a Tab and Pepsi Free, those are things now, that only us children of the 80s even remember! Whoa, that’s heavy. 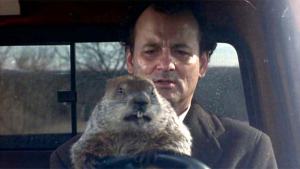 2) Groundhog Day – For me, this is Bill Murray’s best film (though Ghostbusters is my favorite). Working under the direction of his friend Harold Ramis, the two of them craft a perfect temporal tale with lots of heart and laughs. With no explanation of the temporal mechanics involved in keeping Murray’s character in the time loop, the film just pulls you in with its sheer sense of fun, and watching Bill take advantage of the same day repeating over and over again. It also gave me and one of my best friends tons of lines to quote back to each other, over and over again 🙂 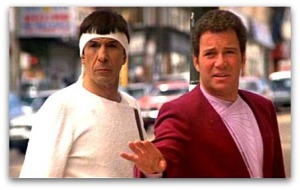 3) Star Trek IV: The Voyage Home – The even-numbered Trek films, before the 2009 relaunch, featuring the Classic Crew were always the best, though even to this day, I still enjoy The Motion Picture, and there are bits in III and V that I really enjoy. But IV, was a welcome time travel tale that saw Kirk and Co. heading back to the late 80s to find a pair of humpbacks (“people?” “Whales, Mr. Scott, whales.”) to repopulate the species, and hope they can avert disaster brought on by a probe sent to investigate why they can no longer hear whale song coming from our little planet. It’s a fun light adventure, which gets us away from the life, revenge, death and life of the past two installments.

4) Terminator 2: Judgement Day – This is the Jim Cameron I miss, the one I want to make another kickass movie. Sure Titanic won Best Picture, sure Avatar looked great, but T2 is everything that I love about Cameron’s films (this and Aliens are always go-to action flicks). There’s sustained tension and action sequences, and cutting edge tech that caused your jaw to drop (admittedly Avatar does have that)! The continuing saga of John Connor was never better than in this film, putting the weight of the world on a teenaged boy’s shoulders, while trying to reconnect with his mother who he had written off, all while trying to evade a liquid metal terminator from the future. Doesn’t really get more awesome than that!

5) Run Lola Run – I love this film. And Franka Potente is brilliant as the title character, running against time over and over again, the same recurring twenty minutes, to get money to her boyfriend before he is forced to rob a store to get it, to disastrous results. There are a number of alternate timelines that come into play due to decisions made and we get to see all of them. Sadly it’s the only foreign film that made my list, but it’s totally worth the watch, whether you like reading subtitles or not. The music is pulse-pounding and the story wavers between humour and pathos, all based on moment to moment decisions. A fantastic watch!

6) Bill & Ted’s Excellent Adventure – PARTY ON!!! Rufus, played by the late George Carlin, is traveling back in time to help Bill and Ted pass their history class, because if they don’t the world will suffer dire consequences because their band Wyld Stallions won’t take off and change the world with their music. Traveling in a phone booth (shades of Doctor Who!) the dim but likable duo travel through time, collecting important personages to speak at their presentation. The film doesn’t claim to be anything it isn’t. It’s a fun romp, with lots of classic lines (“Strange things are afoot at the Circle-K”). It’s got a rockin’ soundtrack, a great sense of fun, and who wouldn’t want to ace a history final in this way?

7) Somewhere In Time – Christopher Reeve travels back in time to romance Jane Seymour. I would too! Reeve plays a playwright named Richard Collier who is asked by an old lady to “Come back to me.” Intrigued he discovers that she was an actress in the early 1900s, and slowly becomes obsessed with her. So much so that he tries self-hypnosis and finds himself back in time, meeting the old lady as a young woman, Elise McKenna. The two fall in love, but can Richard stay in her time? A wonderfully romantic film. Featuring a lovely score by the wonderful composer John Barry, the film is a nice escape from the usual romantic fare, and allows the viewer to imagine what it would be like to cross time for someone you love, and to live in another age with them. Kinda like another title just a little further down the list.

8) Time After Time – Nicholas Meyer, who directed arguably two of the best Star Trek films, II & VI, directs Mary Steenburgen, David Warner and Malcolm McDowell in this temporal tale that sees Warner’s Jack The Ripper stealing and using the time machine that H.G. Wells built and based his story on. The two end up in 1979 in pursuit of one another, Wells to stop the mass murderer, Jack to claim the master-key of the time machine to make his escape permanent, and bar any chance of Wells catching him or stopping him. Wells, who is initially troubled by the fact that the world has not become the utopia he had hoped and written about soon meets Steenburgen’s Amy Robbins. But also places her in danger as Wells and The Ripper circle one another.

9) Time Traveller’s Wife – Based on the tear-jerking, amazing novel, the film captures the heart and soul of the original story. Starring Eric Bana is a man who has become unhooked from time, living out of synch with the rest of the world around him. Rachel McAdams plays the woman who has known him all his life, since she was a little girl, always knowing he would return to her. There are some truly heartbreaking scenes in this film, but not to the point where the film becomes maudlin, it’s full of hope and love, all set to a temporal beat. This movie is a delight for the romantic in me, and just fun for the time traveling buff that I am as well. The wedding sequence is alternately sad and funny, their difficulty with having children is poignant and pays off in such a heart-touching manner. While the book is undeniably better, the film is a great experience. 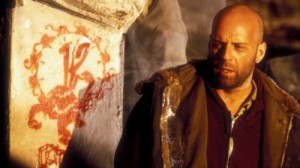 10) 12 Monkeys – In my opinion, this is Terry Gilliam’s best film. The year is 2035 and Bruce Willis is a convict who is sent back in time to gather information about the man-made catastrophe that brought the world to it’s current decrepit state. He arrives earlier than expected and is put in an insane asylum, which may actually help him in tracking down the mysterious Army of the 12 Monkeys. Based on the French film La Jetee, Gilliam’s look at time travel is chilling, crazy, frightening and its future is unstoppable. Because the future is history.

That covers my film choices, and when it comes to television, there is only two shows that have held my attention over the years, both of them are dear to my heart, and at some point I will post at length about them…