The Devil’s Work continues as I plunge into another film from DK Canada’s Monsters in the Movies. I remember seeing this poser as a kid, and it freaked me out. Honestly, even now, I find the poster a little creepy, much more so than the film itself.

The movie stars the wonderful Sam Elliott and Katharine Ross (who met on set, fell in love, and are still together) as a pair of Americans who, while in England, end up in the UK version of the old dark house, with a creep upstairs downstairs thing going on and Charles Gray leading a bunch of satanists, including Roger Daltrey, and a bunch of cats.

Gathered at a remote English mansion where the owner, and five others have had their life’s dreams come true, they are there as one of their own nears his passing, and see what part of the continuing legacy will be theirs.

It’s too slow to be scary, to dull to be creepy, and if it weren’t for watching Elliott and Ross together, there’d be no real reason to dive into it. The would-be scares are too restrained, and predictable, and it just feels a little behind the times, instead of pushing the envelope or putting a twist on a tried and true formula, it ends up being more of the same with only the leading cast and poster to differentiate it from countless other titles from years before. 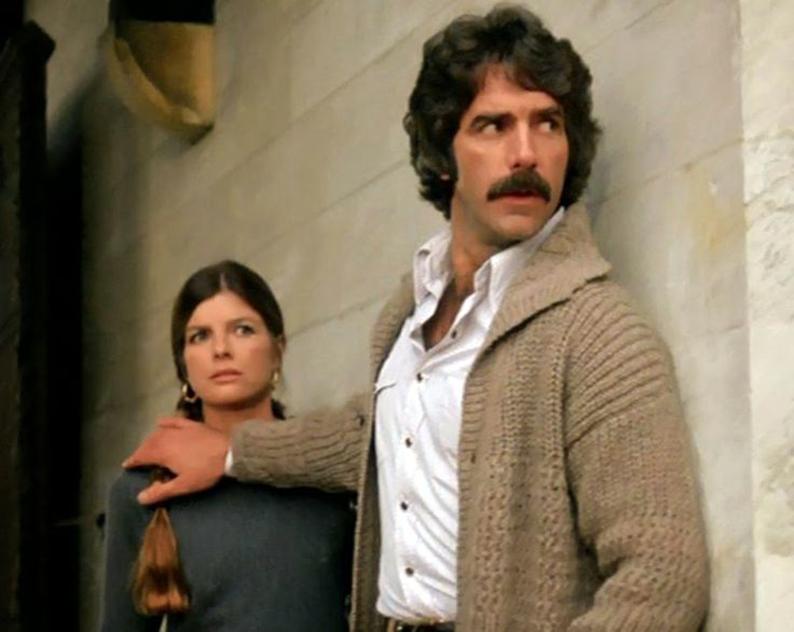 I like Ross, Elliott, and Gray no matter where or when he shows up is always delightful, and Daltrey just brings a laissez-faire to his performance that suggests he’s not acting, but being a version of himself. I was also surprised to find amongst the cast, Margaret Tyzack, who for me will also be one of Indiana Jones’ greatest teachers, Helen Seymour.

I find it kind of interesting that Marquand, who directed this film went on to direct The Return of the Jedi. Not only are they two completely different films, but the pacing, direction and style of The Legacy suggests a completely different person. I don’t know if it was reflective of the time, things that were going on with the director, himself, but there’s nothing between the two films that suggest the connective tissue of the same director.

Maybe I’m being a little harsh, it was the late 70s, and horror was fascinated by satanist and supernatual themes, if not always executed as well as they would be in the coming decades. Perhaps this film needs to be revamped, reshot, and have both Elliott and Ross in supporting roles?

There is more terror yet to come as I explore more of DK Books’ Monsters in the Movies. Pick one up for yourself and find something monstrous to watch tonight!