I knew that they all can’t be winners, but this one was scrape off the bottom of your shoe bad. Killer Ape with one time Tarzan, Johnny Weismuller as Jungle Jim is the next film in DK Canada’s always enjoyable Monsters in the Movies book.

This entry, in the chapter on monstrous apes, was just horrible. Weismuller plays second banana to a chimp named Tamba who has more appeal than the rest of the cast as the little simian runs around freeing captured animals and untying Jim after he gets captured.

I’m not sure where this tale is set, there are lions, tigers, apes, one could argue for Africa, but those actors cast as those who are indigenous to the area are all dressed like they are ready for a luau and live in tents that seem more appropriate for change rooms on a beach.

And then there’s the plot, a group of scientists have come to this area to test a form of chemical warfare, and have been experimenting on the animals that they capture (and Tamba frees on a fairly regular basis).

Jim is caught between the locals and the scientists when he’s accused of murder, and no one wants to believe it was committed by some kind of gigantic Man-Ape (the towering Max Palmer).

A little racist, and also horribly produced, this one is best watched in, to steal a phrase from a classic Canadian film, 3-B, three beers and it looks good. Weismuller’s acting is horrible, but no worse than the rest of the cast around him.

The only character who kept me watching was Tamba the chimp and the antics the fella got up to. There is stock footage of jungle animals, as well as footage shot for the film, but there is no way this film was shot in Africa (in fact it was shot in California – and it shows).

Apparently, Columbia put out a whole slew of these films, and I don’t know if that’s a good thing or a bad thing. I suppose they must have made money on them, but I can’t imagine kids lining up to see these films, I would have been queued up for the horror and sci-fi stuff instead.

And finally, the monstrous ape that caused this title to be put in the book, the towering Palmer, wearing a fur jumper, fur boots, and a questionable makeup job on his face. He neither walks nor behaves like an ape, but he is big. Not quite menacing, as nothing in this film is, but definitely, with the right script, and acting, he could have been intimidating.

This one is probably best forgotten, but that doesn’t change the fact that I am loving DK Books’ Monsters in the Movies. What’s next? 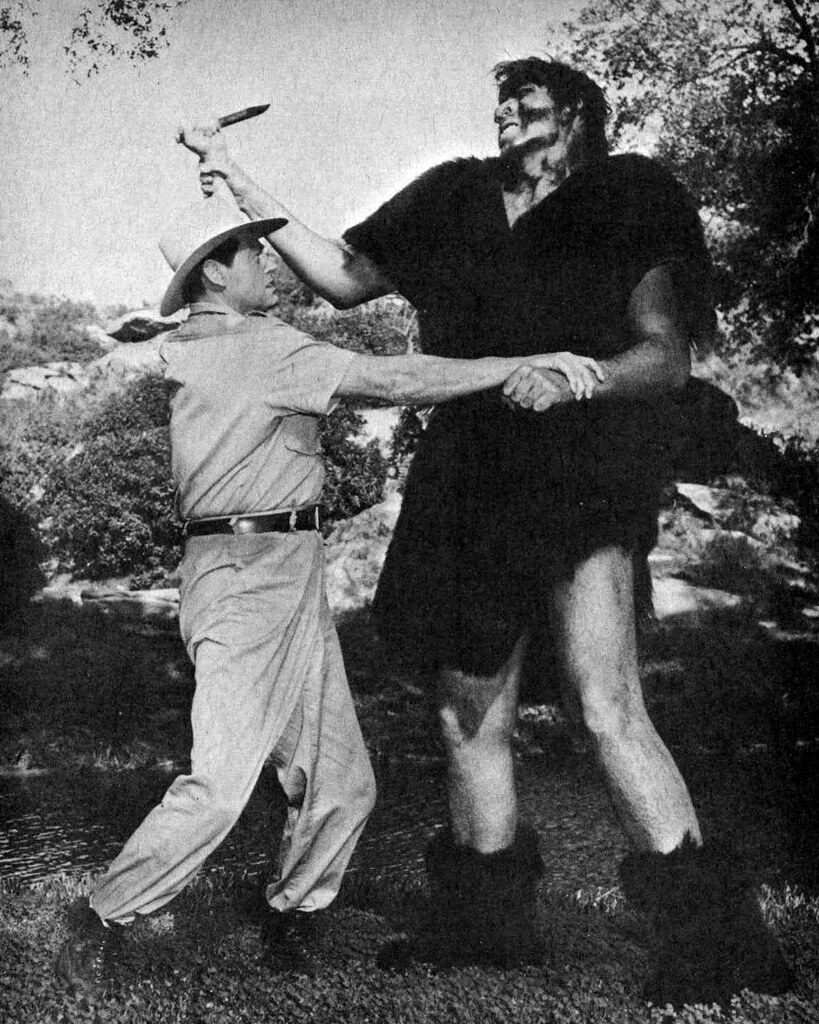