“Keep your friends close, but your enemies closer.”

Obi-Wan as Rako Hardeen is on the run with criminal mastermind, Moralo Eval (Stephen Stanton) and Cad Bane (Corey Burton). The partnership isn’t nearly as strong as Obi-Wan would like, as Bane doesn’t trust him at all, and is dubious about involving him in the plan to kidnap Chancellor Palpatine (Ian Abercrombie).

Meanwhile, Anakin Skywalker (Matt Lanter) and Ahsoka Tano (Ashley Eckstein) are in hot pursuit of the escaped criminals, intent on serving justice on those they believe killed Obi-Wan Kenobi.

As Hardeen comes into conflict with Bane tensions mount, and the hatted bounty hunter (watch for an appearance by Indiana Jones’ fedora when Bane is hat shopping) is quick to betray Hardeen at any opportunity.

But things come to a head when Anakin and Ahsoka catch up to them on Nal Hutta and a fight ensues. Obi-Wan as Hardeen has to make the fight look good, but also has to make sure Anakin escapes, witht he realisation that he is still alive, and deep undercover…

“The strong survive, the noble overcome.”

Obi-Wan remains undercover in the rest of the episodes this week, the next one being The Box. Written by Friedman it debuted on 3 February, 2012.

Count Dooku (Burton) puts eleven bounty hunters, including Kenobi as Hardeen, through a series of trials and tests designed by Eval with the winners being the team who will be on the Palpatine kidnap team.

This is a pretty straightforward episode, the bounty hunters are tossed in this maze filled box, and must figure out how to escape room after room. Harkeen’s skills start to bother Eval, and Dooku senses something about him, but he’s not sure what.

The group is whittled down by the deadly traps in the room, until a final confrontation plays out between Hardeen and Eval. And at the episode’s end, the survivors form the unit that will carry out Dooku’s plan, and Cad Bane will lead them.

It’s a basic episode, with some nice sequences, and there are character deaths as well as not everyone survives the box.

Back in Republic space Anakin comes to realise why Obi-Wan’s death had to appear real to him, but that doesn’t change his feelings about the situation. 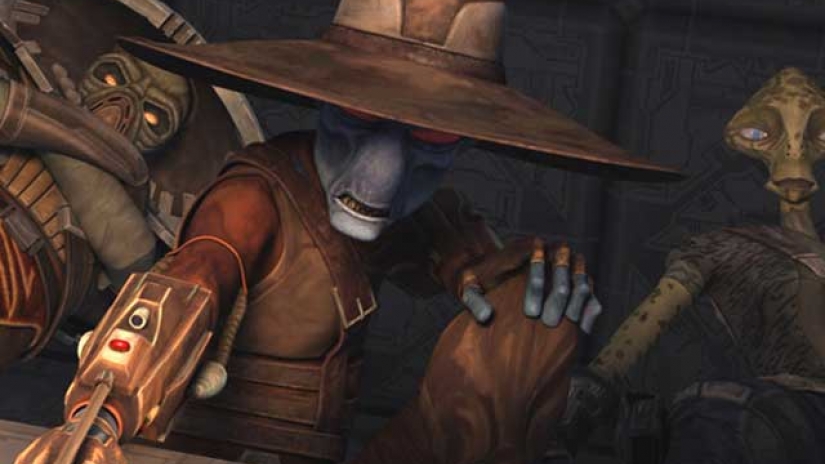 “Trust is the greatest gift, but it must be earned.”

The action moves to the planet of Naboo as Cad Bane and his team, including the disguised Obi-Wan prepare to kidnap Palpatine. Written by Friedman, this episode first aired on 10 February, 2012.

Dooku’s plan, under Bane’s execution is to abduct the Chancellor during Naboo’s Festival of Lights. And here is where everything that has been building over the past few episodes comes to a head. There are battles and confrontations, tricks and double crosses, and Obi-Wan and Anakin are not in a good place with one another once Anakin learns it was Kenobi’s decision to keep the secret truth about his would-be assassination.

Finally, when Dooku is revealed, Anakin and Kenobi are able to confront him and rescue the Chancellor, but they aren’t able to stop the Count’s escape – obviously because he will show up again throughout the series, and doesn’t meet his end until Revenge of the Sith.

There are some great beats throughout this episode, but halfway through, I realised what a truly marvellous villain Cad Bane is, and how welcome he is in the Star Wars Universe.

The battle wages on next week with another trio of episodes from Star Wars: The Clone Wars. Until then, the Force will be with you…