Rick Berman and Brannon Braga concocted the story for this episode, Shadows of P’Jem, which was transformed into a teleplay by Mike Sussman and Phyllis Strong, It debuted on 6 February, 2002.

The Enterprise is receives some troubling news as T’Pol (Jolene Blalock) is to be relieved/replaced. The crew are informed that following the Andorian incident at the monastery at P’Jem, and it’s subsequent destruction by the Andorians, which happened just prior to the opening of the episode, Human-Vulcan fleet operations have been suspended.

The destruction of P’Jem, has the Vulcans partially blaming the Humans, despite the fact that the Vulcans were using the monastery as a front for spying on the Andorians.

Captain Archer (Scott Bakula) is troubled by this news, but for the moment continues with their current mission on a planet known as Coridan. Unfortunately, he and T’Pol are kidnapped while they are there.

They are kidnapped by an anti-Vulcan group, and despite the Vulcan High Command’s urging, the Enterprise plans to mount a rescue attempt. They are joined, not by the Vulcans, but perhaps a new ally, thanks to the efforts of Starfleet at P’Jem.

The episode sees the return of Jeffrey Combs as the Andorian commander, Shran, Gregory Itzin as Sopek, Vaughn Armstrong as Admiral Forrest and Gary Graham as Soval.

This episodes helps to layer out the continuity of the series, as well as the threads and arcs at work for the first season, and does it well. It also shows that T’Pol is becoming loyal to her captain, her crew, and her ship. 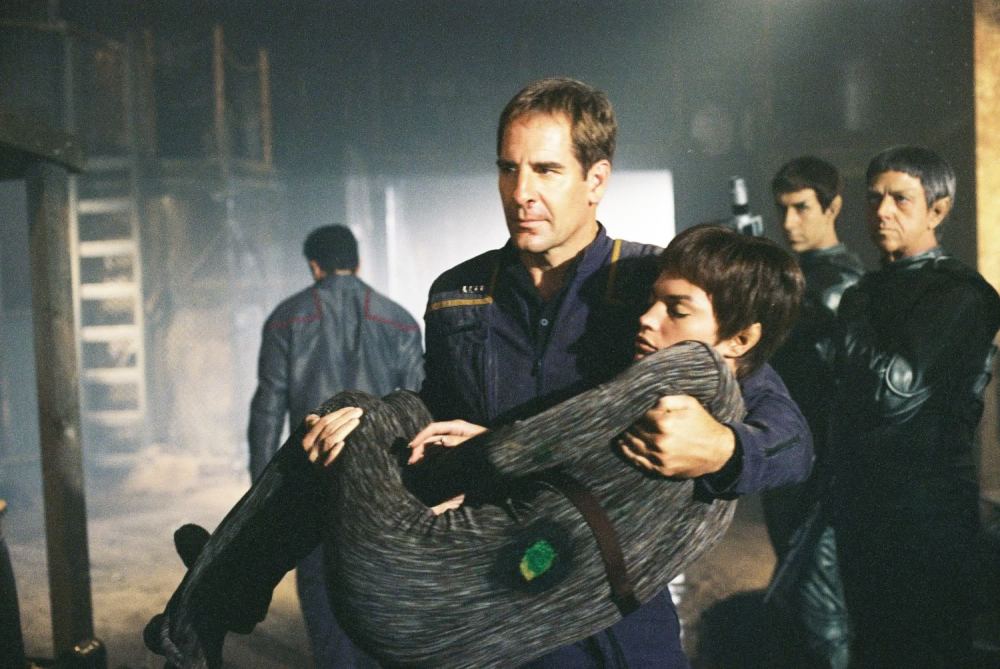 How about a character piece for the other episode this week? Written by Rick Berman and Brannon Braga, Shuttlepod One first aired on 13 February, 2002 and puts Trip (Connor Trinneer) and Malcolm (Dominic Keating) front and centre.

The pair are on an away mission and are on their way back to the Enterprise, when they come across some detritus that suggests that the starship may have been destroyed. With a limited amount of fuel and air, the pair begin to face their mortality, in different ways, and try to figure out if they can survive until a rescue of some sort arrives.

It works not only as a character piece, but as a bottle show, using already existing sets to keep the budget down, but it also advances the character arcs. I remember when this first episode first aired and talking about how impressed my friends and I were with this one.

It’s a great episode for both Trinneer and Keating, and it was a great idea to pair them together, and watch a new friendship develop.

And oh look! those ballcaps are back.

The Human Adventure continues Thursday as I delve into another pair of episodes from Star Trek: Enterprise – The Complete Series on blu-ray, available now from Paramount Pictures.