The Unholy Three is an unusual entry in DK Canada’s Monsters in the Movies for a couple of reasons. It’s Lon Chaney’s only talking film, and the ape featured in the film (we are in the monstrous apes chapter after all) is only seen a couple of times, and isn’t really used for much but as a distraction.

The tale follows three former side show workers, Echo (Chaney) – a master of disguise and voices, Hercules (Ivan Linow), and Midge (Harry Earles). Following along with them is a pickpocket who work the fair grounds, Rosie (Lila Lee).

Altogether they open a local pet shop, as cover (?), and when people come for birds and parrots, Echo, dressed as a little old lady named O’Grady, throws his voice to make the customer believe they can talk. When they call to complain after taking it home that it no longer talks, they case the joint for robbing it. Seems convoluted.

Rosie is sweet on Hector (Elliott Nugent), while Echo has designs on her for himself. This causes our old friend jealousy to raise its head, and complicate things. When a job gets fumbled, and the cops are closing in, Echo sets up Hector to take a fall.

As the case plays out, his honesty and earnestness plays out, along with his innocence, and Echo may be driven to do the right thing.

The ape shows up only to complicate matters at certain points in the story, specifically when Hercules makes his own intentions towards Rosie known, and little Midge saves the day by letting the beast loose.

It’s just an odd melodramatic crime story, that apparently was a remake of a Tod Browning silent film. It’s fascinating to see Chaney do a talkie, and if he had not been in such bad shape at the time (cancer), he would have easily made the transition to talkies, and been a mainstay of the silver screen some time to come.

The less said about the monkey suit, however, the better. The ape was nothing more than a man in a suit, very obviously, and in all honesty to the story, there was no reason for him to be there. It was just an odd choice, and because of it, the story could never be taken quite so seriously as it could have played. Instead I was always worried it was going to devolve into some Three Stooges hijinx.

Still, I knew going in that there would be odd titles in this chapter, that doesn’t make me want to explore them any less. DK Books’ Monsters in the Movies has been proving itself a fantastic read and I am loving discovering new creatures, and catching up with familiar ones as I ease through the pages.

Pick up a copy for yourself and find something monstrous to watch tonight! 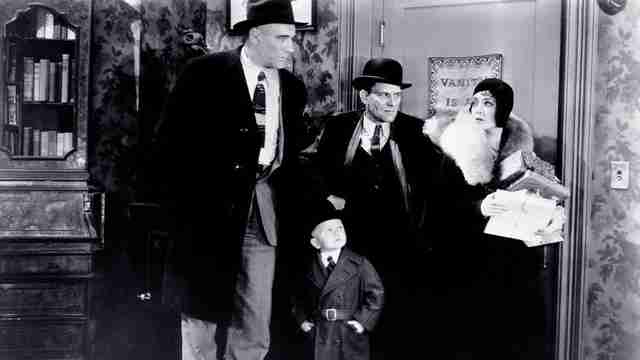