Castillo (Edward James Olmos) gets a bit of the limelight in this episode written by Edward Tivnan, which first aired on 6 November, 1987.

When the son, Felipe (Esai Morales) of a drug dealer, Jorge (Juan Cejas – who will always be a Joan Wilder fan to me) returns to town, the team is trying to figure out why he’s in town, and if he’s going to take over the family business despite playing on the straight and narrow his entire life.

Castillo goes to see a mutual friend, and a priest, Ernesto (Daniel Lugo) and when the Father turns up dead, because he may have known something about a young man, Louie (Juan Cejas), and Felipe.

And this is the real reason that Felipe has returned to Miami. Not to join his father’s organization, but to come to side of a dying friend (and lover).

The only downside to this episode is that it is caught between two terrible episodes. Castillo doesn’t get enough time to shine throughout the series, and when he does get his episodes they are always something special.

This was one of the only shows to air in the 1980s that actually talked about AIDS, as apparently it was too controversial for some shows to tackle. And watch for this… Castillo laughs for the only time in the entire series in this episode!

Music includes Mambo Terrifico by Cal Tjader Sextet, Nine Million Rainy Days by Jesus and Mary Chain, Love and Rockets’ Yin and Yang and the Flowerpot Man, and Modigliani by Book of Love. 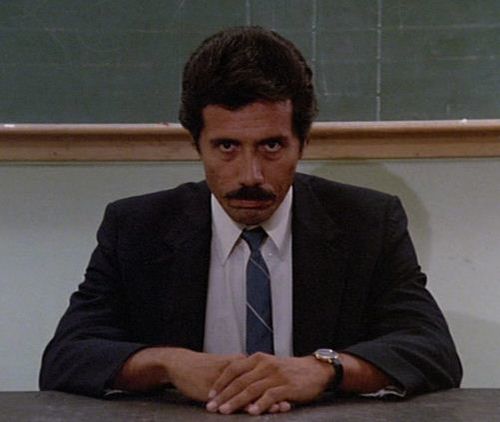 Missing Hours may be the worst singular episode of Vice EVER. Thomas M. Disch wrote this episode that aired on 13 November, 1987. Taking its inspiration from the rash of sightings that were reported in Gulf Breeze, the story features Trudy (Olivia Brown) encountering what may be a UFO.

Or is it a top secret government project?

The episode features missing time, missing bodies, unblinkng Men in Black, and strange encounters, and is often defined as the moment that the show jumped the shark, heading now towards an inevitable ending. It’s silly, banal, and even if the Gulf Breeze incidents were real, they don’t treat the possibility very intelligently.

It’s just a horrible epiosde. And yet, six years later, when the idea is treated with intelligence and production value… we got The X-Files.

The episode features James Brown, Chris Rock, Martin Ferrerro and Charlie Barnett (his first appearance since season two, and his final one). It also sees the addition of John Petersen to the music of the series, sharing credit with Jan Hammer.

The music includes Brown’s I Feel Good, and Paint the Road by Adrian Belew.

Next week, the series gets back on track, with some solid stories again, and introduces a new love for Crockett… but the streets will still need to be cleaned up in Miami Vice.