The next werewolf title that DK Canada’s very enjoyable Monsters in the Movies recommends doesn’t only feature a Wolfman (Carl Thibault), but also includes Dracula (Duncan Regehr), the Mummy (Micheal Reid MacKay), Frankenstein’s Monster (Tom Noonan) and the Creature From the Black Lagoon known as Gillman (Tom Woodruff, jr.) in this version.

This cult favorite from the 80s was co-written by Shane Black, and plays like a cross between The Goonies and Ghostbusters with a dash of the Little Rascals. I remember the first time I saw this one, and was completely engaged in the story, and its mythology, despite the fact that I was a couple of years older than most of the kids in the film.

Sean (Andre Gower), Patrick (Robby Kiger) and his pals love their monster movies, their club house is covered in horror pictures, and they are celebrating their prepubescence by palling around and having a goofy time, completely oblivious to the existence of girls, except in the form of younger or older sisters.

There is a hidden depth to the film that is often missed, and is hinted at barely through Scary German Guy (Leonardo Cimino) and his past as well as things with Sean’s parents, (Mary Ellen Trainor and Stephen Macht), which almost seems out of place in this romp, but it shows that there is more going here than what is on the surface.

When Sean’s small town is suddenly the epicenter of the arrival of all the classic monsters, the young group must go after the creatures and reclaim an amulet that will open a portal to destroy the monsters once and for all. And hopefully they won’t blow it like Van Helsing (Jack Gwillim) did.

Sure not all the humor would work in today’s day and age, especially when it comes to Horace (Brent Chalem), and some of the dialogue is less than stellar (and some of it is endlessly quotable), but it’s a sharp fun film that endures simply because there is something that resonates with viewers and their love of monsters.

There’s a wonderful sense of play to this one, and some great nods to the classic creatures, including some creature work by Stan Winston Studios. My only complaint about the film is that it’s too short, I would have loved to have spent more time with this Monster Squad.

This is a favorite of mine, and I am always happy to revisit this one. If you’ve never seen it, treat yourself, and if you have, isn’t it time to watch it again. Or maybe you can find something else awesome to watch in DK Books’ Monsters in the Movies. 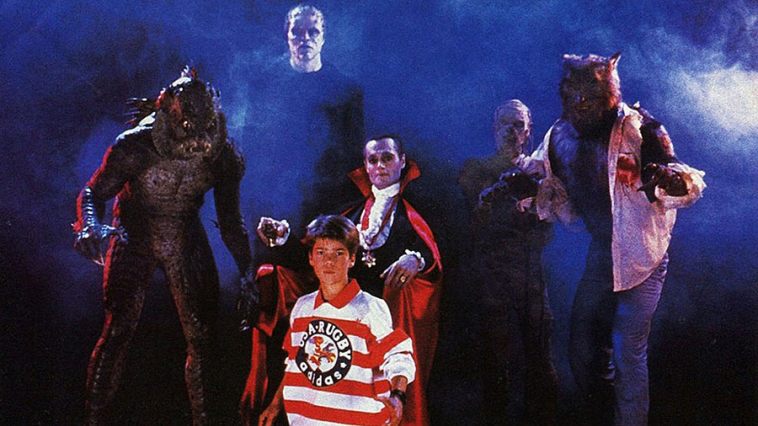