Micheal Taylor pens this exemplary episode that first aired on 9 October, 1995. Tony Todd plays an adult Jake Sisko as we find ourselves in a temporal tale that is one of the best of the series.

A young writer, Melanie (Rachel Robinson) knocks on an elderly man’s door, and we learn, very quickly, that the man is Jake Sisko. She’s come to see why he no longer writes, after only publishing two books.

He regales her with a tale set forty years earlier, when he was eighteen (i.e. Cirroc Lofton) and how his father, Captain Sisko (Avery Brooks) died. The store unfolds beautifully as we learn that Sisko was apparently involved in an accident aboard the Defiant that claimed his life.

But Jake has since spent the rest of his life searching for his father, after he reappears (on a fairly regular basis), and then hunts for a way to save him.

We see future history, or at least this version of it, as Jake is forced to leave DS9 after a Klingon occupation, and tries to find a life for himself, attempting to put his pain behind him.

Todd turns in a heartfelt performance, and this episode is just a solid piece of storytelling.

The ending sees the resolution of the timeline, but it doesn’t feel like a cheat, it feels earned and perfect. It’s about fathers and sons, the need they have for one another, and the way we spend out lives.

Debuting on 16 October, 1995, Rene Auberjonois directs this episode that sees Worf (Micheal Dorn) attempting to settle in to life on Deep Space Nine, while Doctor Bashir (Alexander Siddig) tries to find a way to help members of a group of Jem’Hadar to break their addiction to the drug, ketracel-white, that the Founders use to control them.

Worf doesn’t like the way Odo (Rene Auberjonois) runs security, but realizes that he needs to come to terms that this isn’t the Enterprise, and things are a little different. He and Odo have a number of run ins over Quark’s (Armin Shimerman) criminal activities.

We get to see the continuing development of Bashir’s and O’Brien’s (Colm Meaney) friendship. They’ve got such great chemistry. Bashir is challenged by the leader of the Jem’Hadar group to find a way to break the shackles of their drug addiction. It’s a great story, and also serves to add some tension to their friendship.

But it’s the stuff that is going on aboard DS9 that catch my attention as their is a continued discussion of the Klingon problems in the Alpha Quadrant, even with the Dominion threat hanging over them.

The episode serves to teach us more about the Jem’Hadar, and in fact this episode humanizes them a bit. It also lets Worf find his footing in his new assignment.

The Human Adventure continues Thursday with Voyager, and Deep Space Nine The Complete Series carries on next week. Check out both series available now on DVD from Paramount Pictures. 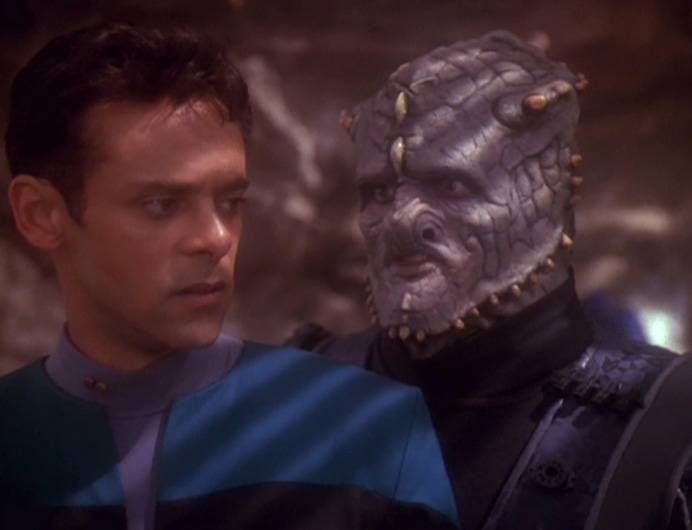