Rene Echevarria pens the penultimate episode of season three, which aired on 12 June, 1995, that gives us a Dax (Terry Farrell) story. The science officer approaches each of her friends amongst the crew and asks them to join her in the Zhian’tara ritual, which will allow her former hosts to temporarily inhabit their bodies and have a form of closure with them.

Chase Masterson’s Leeta makes an appearance, apparently she and Dax have become good friends, and it definitely moves her character into the supporting role of recurring character. Sisko (Avery Brooks), Kira (Nana Visitor), Quark (Armin Shimerman), Bashir (Alexander Siddig), O’Brien (Colm Meaney) and Odo (Rene Auberjonois) all take part in the ritual, and it allows for the actors to play something a little different as their characters play other characters.

All of them seem delighted with the opportunity to try something new, but no one seems to have as much fun as Auberjonois as Dax’s previous host, Kurzon.

Of course problems arise for both Nog and Dax, as they both go through a coming of age ritual and prepare for their futures. Quark tampers with Nog’s tests, and Kurzon/Odo reveals why he didn’t want Dax to be an initiate.

Nog is such an earnest character in this episode, you can see the hopes and dreams of a young man as he pushes against type to be more than some think he can be.

A solid episode that gives us a quick breather and some nice character moments before we dive into the season finale.

Sisko is finally promoted to captain in this episode that was written by Ira Steven Behr and Robert Hewitt Wolfe. Airing on 19 June, 1995, The Adversary closes out season three and sets up what’s to come.

A coup has taken place in the Tzenkethi area, and a Federation ambassador, Krajensky (Lawrence Pressman) orders the newly minted captain to patrol it with the Defiant. But not everything is as it seems, the Defiant is suffering a number of malfunctions which leads Captain Sisko to believe they have been infiltrated…. there is a changeling aboard.

They deduce the changeling’s plan is to help instigate a war that will make the Federation weak, allowing for an easier conquest by The Domion. The crew investigate attempting to track the Founder and stop them before a full-scale battle erupts.

The episode ends with the stunning reveal… that the changelings are everywhere..,

Season one of Star Trek: Voyager ends next week, and we’ll dig into season two, the following week sees the launch of season four of Deep Space Nine as I continue to explore both titles with Paramount Pictures The Complete Series collection for both titles. 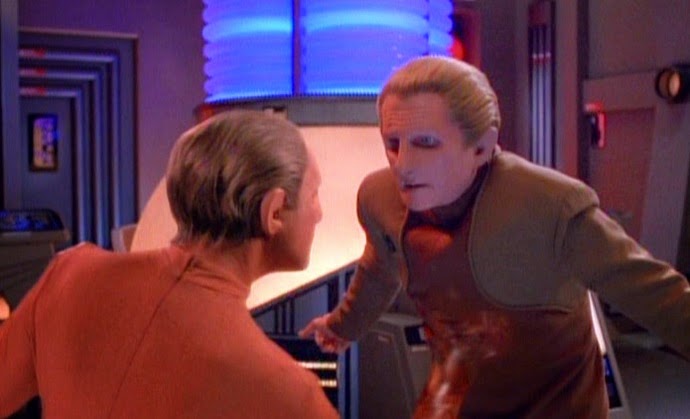