Moonbase Alpha continues it’s not exactly lonely journey through space – there is a lot of life out there apparently, and all so conveniently close for storytelling purposes.

The joy of the first newborn birth on Alpha takes a turn for the mysterious when the child grows to the age of five in hours, and is only the precursor for the arrival of a new group of aliens, spirits without bodies, who have their eyes set on the Alphans.

Naming him Jackie (Wayne Brooks) the young boy seems deaf and mute. The entire base takes him under their wing, showing him everything, while his mother shuns him.

He seems to be learning, studying them, and he may only be the first to arrive. Soon a ship approaches and Alan (Nick Tate) investigates in his Eagle, while Koenig and crew watch.

The Commander becomes convinced that the ship is peaceful, and wants to communicate, and he begins to suspect that there’s a connection between Jackie and the arriving ships, even as they threaten the moon and its inhabitants.

Of course Koenig’s suspicions are (mostly) correct, the boy is connected to the aliens. He’s always right, he’s the commander.

Jackie collapses, and grows again, becoming a strangely garbed being with psychic powers that calls itself, Jarak (Julian Glover). They attempt to seize control of the base, and prepare the rest of the Alphans as hosts, but will Koenig and the rest be able to come up with another solution?!

Dragon’s Domain was also written by Penfold, and debuted on 23 October, 1975.

This episode is set on the 877th day of the moon’s journey, and they have now left our galaxy and travelling to another (how fast are they going!?!?). The story centres around a discredited Eagle pilot, Tony Celini (Gianni Garko). Speaking of, we learn that even between the galaxies, they are three months flight in an Eagle (let alone the moon) before they reach another star system.

It seems Tony is having nightmares, and is being haunted by a strange presence. He keeps dreaming (remembering) a mission that went disastrously wrong, leaving him as the only survivor.

But it may be more than just a dream, because all the events, and moments of his nighttime imaginations seem to be coming to be.

Celini and Koenig had a worked together on something called the Ultra Probe back in 1994, and it’s launch in 1996, all of which took place on Alpha (who knew Koenig had been assigned there before assuming command in 1999?), and the ISS.

Russell narrates Celini’s story as it plays out on screen, which sees the probe discovering a spaceship’s graveyard out amongst the stars. But it isn’t a lifeless graveyard, some strange being is there, a monster (!), and it kills everyone it can get it’s tentacles, arms, mandibles, claws, and so on.

Celini is the lone survivor (think Alien on a television budget). and escapes back to Earth.

Now, on Moonbase Alpha is he going mad, or is he the key to stopping it all from happening all over again? 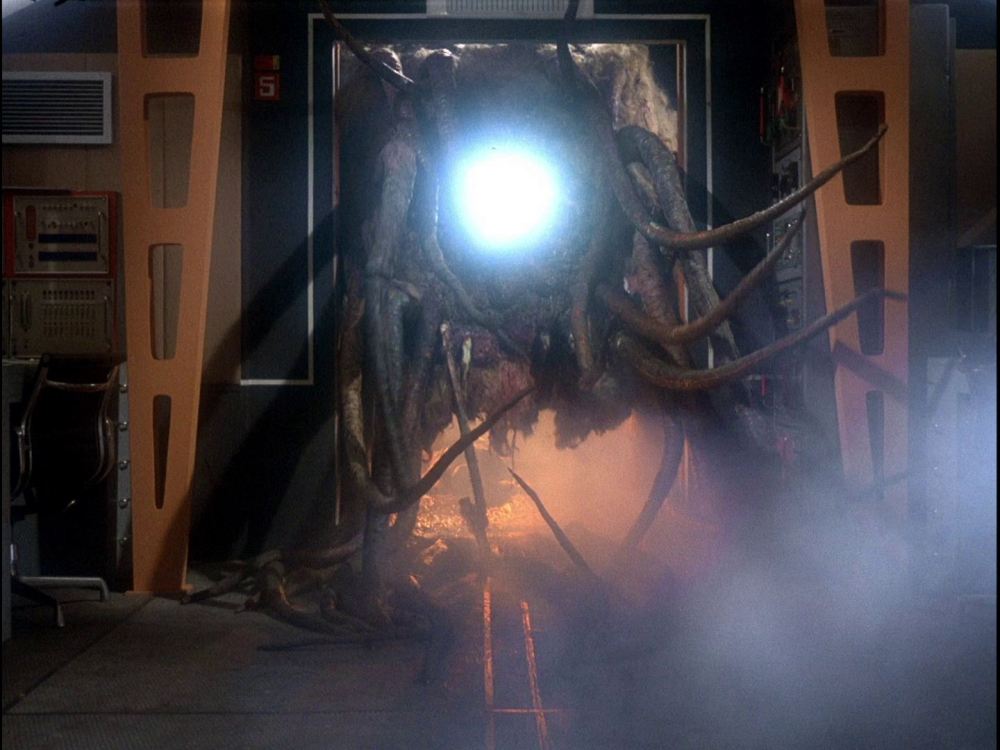