I for one though was quite happy to give this one a fair shake for two reasons, Dwayne Johnson and Weta Workshop. That being said there are things that I don’t like in this film, the super-saturation of computer-generated images. Still, I was ready to buckle up for what promised to be a popcorn thrill ride.

A modern day monster movie with just a little bit of science in it to serve as a launching point, the story is about genetic editing. A space station in high orbit is destroyed when an augmented experiment gets loose, and some of the experimental material survives re-entry to be consumed by a couple of different animals and Davis (Johnson) gets hauled in when the albino gorilla he works with, George, a wonderful creation by Weta, is infected as well.

Johnson is just a fun performer, he’s not afraid to be goofy, and he doesn’t take himself too seriously, but always seems to want to put his best foot forward. So when you have an actor like that, you’re usually willing to give them the benefit of the doubt and buckle up for the ride.

And that’s what you do here. 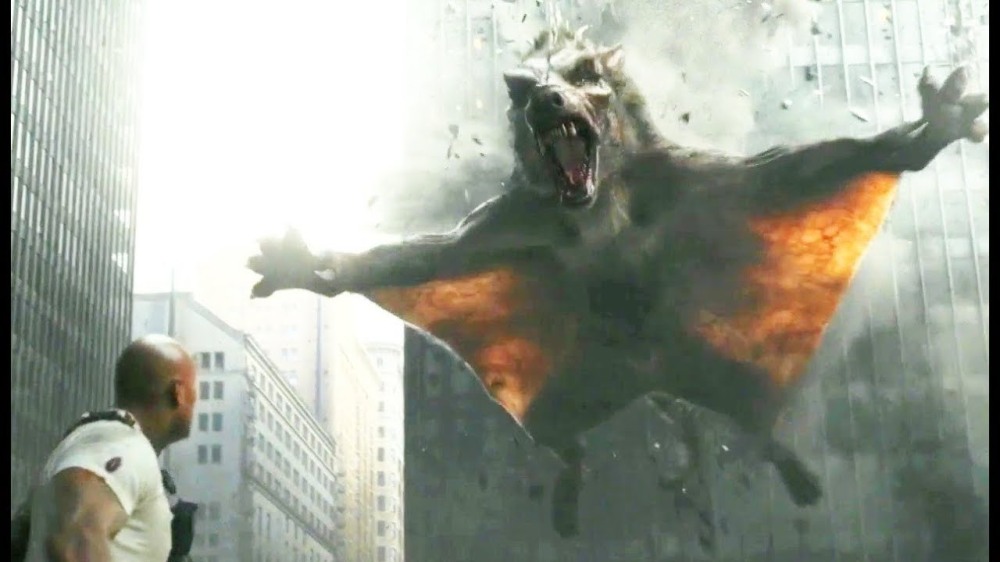 Once the infected animals break out of their respective geographic areas, Davis pairs up with Dr. Kate Caldwell (Naomi Harris), forms an uneasy alliance with Agent Harvey Russell (Jeffrey Dean Morgan) and he and George, who has gone Kong-sized, tear up Chicago to stop two other vicious mutations.

There is a lot to like about the film, director Brad Peyton keeps the story moving (though there isn’t a lot of it – it’s mainly set up for lots of destruction). It’s hard to get too emotionally involved in the story, because you can still tell when things aren’t quite real, so the monsters and the destruction, while looking great, lacks the reality to totally dissuade suspension of disbelief.

Weta workshop is behind all the visual effects, and creature design, as well as transforming movement actor, Jason Liles into George. However I feel about the other creations in the film, and the popcorn mass of destruction, George looks amazing.

The destruction is fun, unbelievable, and perfect for a movie evening in, ignore the plot holes, and the moronic idea of putting a beacon that attracts these monsters in the centre of Chicago, and just settle in for the ride.

That’s all it is, that’s all it claims to be, just a ride. And if you have a solid sound system set up with your entertainment unit, this one should play very nicely!

The extras include a series or featurettes from the adaption of the video game, and breaking the story, the effects (which gave me a nice appreciation for the things going on in the film), the shooting (and destruction) of Chicago, the work of Liles in becoming George, some deleted scenes, and a gag reel.

Rampage is available from Warner Brothers on blu-ray and DVD today.