Brannon Braga pens this episode that was directed by Gates McFadden. It first aired on 21 March, 1994.

Captain Picard (Patrick Stewart) and Data (Brent Spiner) take a shuttle into an asteroid field to retrieve a torpedo that uses a new (malfunctioning) guidance system. Back on the Enterprise, a medical treatment by Crusher (McFadden) goes horribly wrong, and causes the crew to de-evolve, turning them into horrible creatures.

Picard and Data work to find a solution.

I’ve never seen Sick Bay so busy when it opens, Riker (Jonathan Frakes) is in there, Barclay (Dwight Schultz) and Data’s cat, Spot (she’s due to deliver a litter) is there when the episode opens.

When the pair leave the ship, things begin to escalate quickly, affecting Worf (MIchael Dorn) and Troi (Marina Surtis) first. All the characters soon begin to exhibit strange behaviours, and when the shuttle returns two days later, things are very odd, a virtual house of horrors, and the virus that has mutated the crew has infected Picard.

They have twelve hours to find a cure… and Spot or Nurse Ogawa (Patti Yasutake) may be the key.

This ends up being a fairly fun episode, and McFadden has a handle on the jump scares, and spooky moments, as well as the comedic ones that play out over the course of the episode. And the de-evolved crew are nicely made-up.

A very nice episode and a step up from some of the less stronger episodes that are rounding out the finishing season.

Ronald D. Moore pens this episode which features Wesley Crusher’s (Wil Wheaton) last appearance in the series, which leaves some questions about his appearance in Star Trek: Nemesis, but we won’t worry about that here. He’s also a little moody with everyone on the ship.

A number of planets are being ceded back to the Cardassians in compliance with a treaty, but one world, Dorvan V, is home to the descendants of Native Americans, and they don’t want to give up their land.

Picard is under orders to relocate them (a plot that would be later revisited in part in Star Trek: Insurrection).

With the Cardassian threat growing a solution presents itself in the form of an old friend… The Traveller (Eric Menyuk).

A solution is discovered, and a peace is achieved. The Enterprise continues on its way, and Wesley begins his own journey…

The episode is okay, it doesn’t help that the Native Americans are referred to as ‘Indians’ throughout the story.

The Human Adventure continues Thursday when I join the crew of Deep Space Nine for more exciting episodes! 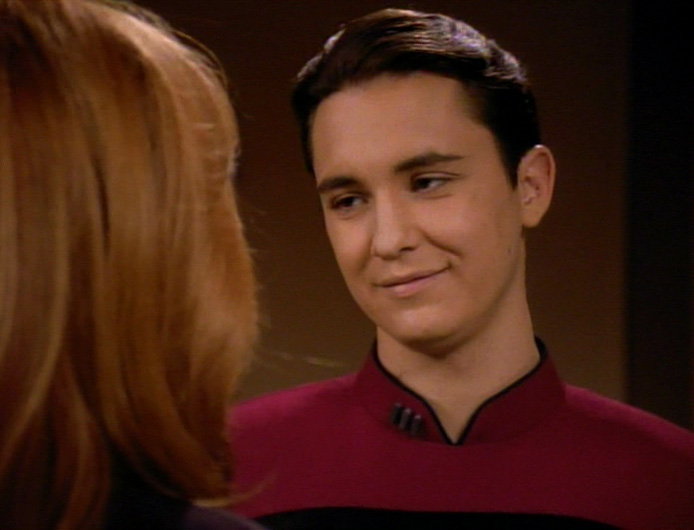