I return now to DK Canada’s The Movie Book, where their next big title recommendation is Orson Welle’s opus, Citizen Kane. Having previously reviewed it, I moved right along to the What Else to Watch section, and discovered a Welles film that I hadn’t watched or reviewed before.

Based on Kafka’s novel, The Trial features Anthony Perkins as Josef K., a man who has his life plunged into a nightmare when he is awakened in his tiny one room flat by the presence of police officers who are there to arrest him.

Despite putting him under arrest, they won’t tell him what he is being charged with, and he is still able to do his job while awaiting trial.

When time affords it, he tries to look behind the curtain, to understand the judicial process moving against him, to perhaps find a way to survive it, or prove his innocence, despite the fact that he doesn’t believe he’s committed a crime.

Welles takes on a paranoia-fuelled nightmare that is recognisable to anyone who has tried to deal with bureaucracy, as well as the law.

Perkins seems perfectly cast, his anxious, nervous behaviour adding depth and terror to Josef’s character, as he wanders the halls of the courthouses, the giant open spaces of his work, and all the laws that apply to each of them. 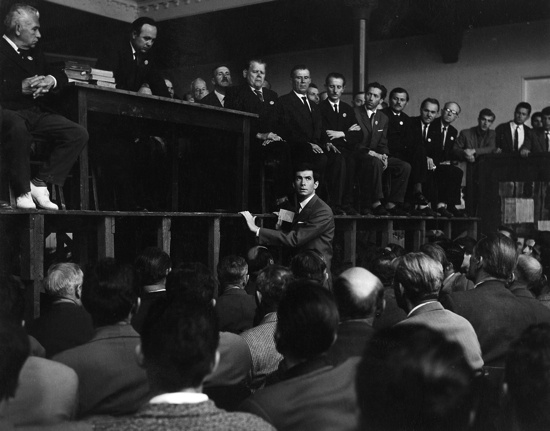 Shot on location in Croatia, Italy and France, the film when screened to a North American audience must have seemed slightly off-putting, and a suggestion of the ‘communist menace’ provided by the U.S.S.R.

Everything about the film is done to make the viewer uncomfortable, troubling angles, camera movements, and production design. Everything adds up to make us feel as anxious, and paranoid as Josef becomes. Perkins seems to tall for his room, nearly brushing the ceiling, yet he is cowed by the shorter police officers, who are spark plug like, dressed in black and trench coats, and feel threatening by their very presence.

Josef confronts the courts, prisoners, the people themselves, and is unable to find a way clear of the trouble he finds himself in.

Welles, who appears in the film as Advocate Hastler, keeps the viewer and Josef on edge until the film’s conclusion, as it pontificates on the nature of the law as well as the people’s involvement with it.

This one was an interesting and involving watch, and brought me an Anthony Perkins film that I hadn’t seen previously. And to be honest, if the film was that paranoid, I’m not sure I could have taken Kafka’s original book.

Find a classic film to watch tonight with DK Books’ The Movie Book and discover the magic of cinema!