Buckle up, folks. It’s time for another trio of episodes from Paramount Pictures superlative The Twilight Zone: The Complete Series blu-ray collection.

With the help of a physicist friend, Bill (Charles Aldman) they learn that little Tina is in the house, but not in our reality, she’s fallen through a portal (followed by the family dog) and it’s up to Chris to bring her out again.

This one reminded me of a sequence in Poltergeist (1982), and perhaps this episode influenced it. Now, having seen this episode, I really feel that the classic film does in part make a nod or two to this tale.

Chris, and his wife, Sarah (Ruth Miller) try to stay in touch with their little girl, and hope to find her, and bring her back, but what’s on the other side of the portal? And what happens if Chris goes in after her?

I quite like this episode, but the sequence on the other side of the portal isn’t as good as it could have been. It’s a big idea, but poorly realised and hidden by camera tricks. This one was pretty enjoyable.

The extras include a commentary by Zone historians Marc Scott Zircee and Mark Fergus, sponsor billboards, and an isolated score featuring Bernard Herrmann. 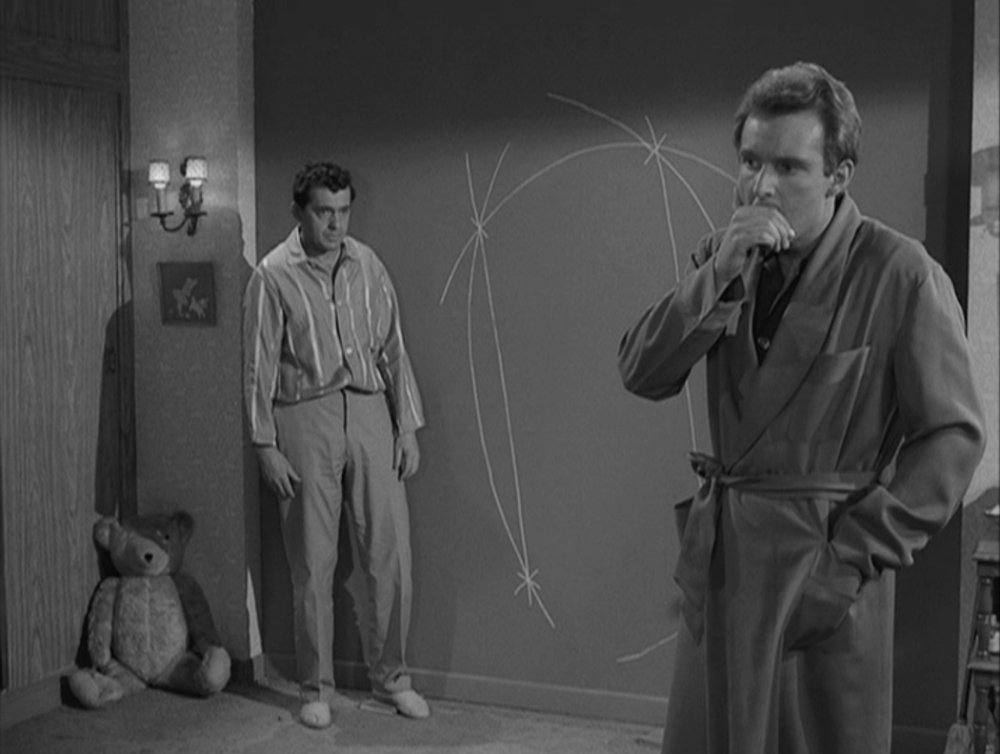 Person or Persons Unknown was written by Charles Beaumont and first aired on 23 March, 1962.

David Gurney (Richard Long) is about to have a very bad day. After an enjoyable evening the night before, David wakes to realise he is late for work. He asks for some help from his wife, but she doesn’t know who he is, and demands that he leaves. At work, it’s the same story, he knows all of them, but none of them recognise him.

His identification claims he is someone else, but Gurney KNOWS who he is. So why doesn’t anyone else?

Committed to a hospital, the doctor, Koslenko (Frank Silvera) tries to break Gurney of his perceived delusion, but he clings to his beliefs.

Wherever he goes, he revisits places he knows and people he is acquainted with but none of them seem to know who he is.

The twist, when it comes along is nicely done, and a little unnerving. I love how this one ends, and how it leaves the character. The longer you think on it, the more it gets under your skin and really starts to creep you out.

Beaumount’s stories tend to be very reliable and he and Matheson seem to turn out the best ones.

The extras on this episode include an isolated score, and billboards.

The Little People was penned by series creator Rod Serling, and aired, originally, on 20 March, 1962.

Two astronauts, Peter Craig (Joe Maross) and William Fletcher (Claude Akins) have landed on a far distant planet. While Fletcher goes over the ship, Craig, who is a but tired of taking orders, wanders off to explore.

He discovers a race of tiny beings, who begin to worship him as a god. When Fletcher is ready to leave, Craig refuses, enjoying his new found divinity and authority.

While the little aliens build a statue in celebration, Fletcher is less than impressed with Craig, thinking that these beings deserve better in a god. Craig is adamant that Fletcher leave him behind so that he can enjoy his lordship over the small beings, but you know and I know that things aren’t going to work out so well for Craig by story’s end.

How long will these beings put up with Craig’s threats, and cruelty? And what happens when Craig discovers his real position in the universe?

The extras include a 1978 interview with producer Buck Houghton, an isolated score, and billboards.

There will be more next week, as we delve further into the Zone with our exploration of The Twilight Zone: The Complete Series, available now on blu-ray from Paramount Pictures.