David Gerrold revisits one of his most popular creations in this week’s animated foray into the Trek universe. Airing on 6 October, 1973, the Enterprise encounters Cyrano Jones (Stanley Adams) again, and this time the tribbles are definitely causing more troubles.

It seems the little animals are growing to incredible sizes, but Jones may have a fix that will help clear the Enterprise and perhaps get him on the good side of Captain Kirk (William Shatner) and Spock (Leonard Nimoy).

I love the fact that the episode opens with Jones being pursued by Klingons who are less than happy with the trader. The D7 cruisers look good in animated form, and the encounter they have with the Enterprise is scripted and put together very well.

And not only are the tribbles back, but so is Klingon commander Koloth (performed by James Doohan). While we don’t learn a lot more about tribbles, except for the fact that Jones has modified them from reproducing, and that he now has a predator that hunts them, a glommer.

The story balances nicely between the tribbles and the Klingon’s new weapon (as well as tying everything up nicely), and much like the previous episodes, feels like actual, canon Trek. And that will be the way I will always see it. The Survivor was written by James Schmerer and first aired on 13 October, 1973.

Things aren’t exactly as they appear to be when the Enterprise travels to the Romulan Neutral Zone and discovers a long lost and famous humanitarian, Carter Winston (Ted Knight).

Spock, Kirk and McCoy (DeForest Kelley) are stunned by the man’s arrival, and his fiancee, Anne Nored (Nichelle Nichols) is delighted to have him returned, until he breaks her heart. This hints that Winston isn’t all he appears to be.

He is in fact an alien being who can shift his shape, but in his purest form is a tentacled creature, but perhaps more of Winston remains than the creature thought. Consequently, the concept of love and change is explored, and rather nicely considering the short episode time.

It’s also nice to see the Romulans featured, despite the fact that they are using Klingon cruisers – I miss the Bird of Preys.

In the end Winston fights for the crew and protects them from the Romulans. The creature reveals himself and saves the day, while apologising for the events that he got the Enterprise into it.

It’s actually a pretty good story, not the best one we’ve seen in this series so far, but it explores some important things in traditional Trek ways. 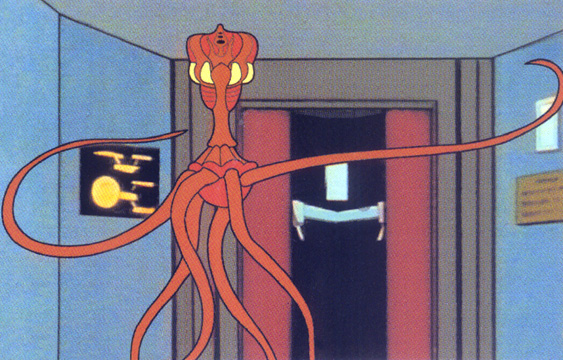 The Infinite Vulcan was written by Walter Koenig (his only involvement with the series) and aired on 20 October, 1973.

A race of intelligent plants see the path to galactic peace through the creation of clones, and Spock is the next one on their list. And while they claim to be peaceful, Kirk, McCoy and Sulu (George Takei) begin to suspect darker motivations for the strange beings.

The revelation of the clones, and the plan of the plant creatures is done as well as it could be in an animated and shortened format. Unfortunately, when you start talking about a brain transfer, for Spock, again, you can’t help but fear this is going to be as horrible as Spock’s Brain, but it’s not that bad.

The best thing about this episode is that the aliens, like the survivor in the last episode, could never have been created believably on the Original Series. It’s an interesting episode, but far from being a strong entry in the series.

It does make a reference to the Eugenics War that ties it in nicely to existing canon.

Next week, the animated journeys boldy go as the Human Adventure continues…