It’s 10 March, 1975 and Sam (Scott Bakula) finds himself under a Blood Moon. Written by Tommy Thompson the episode first screened on 9 February,1993.

As Nigel Corrington, Sam finds himself in the form of an eccentric artist who takes on a number of vampiric affectations, and who Al (Dean Stockwell) believes is the living dead, nosferatu.

Recently married to a young woman, Alexandra (Shae D’lyn), Sam and Alexandra are about to celebrate the vampiric tradition of the Blood Moon with Victor Drake (Ian Buchanan) and his cohort Claudia (Deborah Moore).

Al informs Sam that if he can’t change history somehow, Alexandra will be found dead, completely drained of blood.

This one is a little silly, like Sam is stuck in a Hammer Film. Every cliche seems to be thrown into the episode but it makes for a fun break, even if it isn’t the best, most dramatic, or theme invested episode.

Sam is a bit clumsy in this episode,obviously out off by the trappings he finds himself in. At least Al owns his fear.

Sam senses something about Drake (Dracula?), and he becomes determined to ensure Alexandra’s life, even as he deals with the tropes of the genre that are being thrown at him. 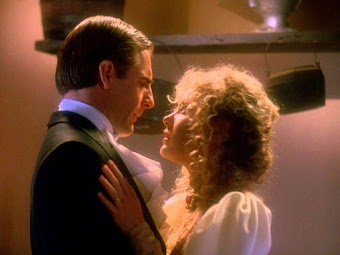 Alia (Renee Coleman) and Zoey (Carolyn Seymour) are back when Sam lands on 8 October, 1956. Sam leaps into a member of a college and soon discovers that his opposite number time traveller is there as well.

Sam is Arnold Watkins, a costumed and masked do-gooder trying to prevent his fellow students from making mistakes. Alia is there to stop Arnold, and possibly Sam, once and for all.

Neil Patrick Harris guests in this episode as Mike Hammond, the head of the local fraternity, who has Arnold in his sights.

The reason Sam is there is a little unclear after the opening sequence, but once Alia leaps in its clear what her mission is.

I like the fact that the story is set in the 50s, it plays the nostalgic feel of innocence and gets the conflict of good and evil, as Alia and Sam square off. For a large portion of the episode neither Sam nor Alia is aware the other is there, and the audience hopes over and over for the two characters to touch one another so that they realise who they are.

Once they connect, Sam presents a theory, one that suggests that the two of them could leap together… Which they do, but they find themselves as inmates in a women’s prison… oh boy.