The Deadly Years soared onto screens on 8 December, 1967, with a script by David P. Harmon.

Kirk (William Shatner), Spock (Leonard Nimoy), McCoy (DeForest Kelley), Scotty (James Doohan), Chekov (Walter Koenig) and Galway (Beverly Washburn) beam down to Gamma Hydra IV. Once there they discover that the entire outpost is either dead or dying from old age despite the entire staff of the colony being no older than 30.

On returning to the Enterprise, the landing party, but for Chekov, begins to age rapidly and without medical explanation. Could it be a new Romulan weapon? As Kirk and the rest age, their own judgement begins to become impaired bringing in to question command ability.

Will they find a way to reverse the ageing? Will Kirk and his crew survive?

There is a lot of fun with Chekov this episode, and he gets to some great lines. Kirk, Scotty, Spock and McCoy’s ageing, meanwhile, allow the actors to explore how they believed their characters would grow old – no surprise that none of them were close to the mark, as we’ve seen over the decades.

The rapid ageing causes a competency hearing on Kirk’s ability to command, even as they draw closer to figuring out what caused the acceleration.

This one ends up being a very solid story. It also serves as a commentary on degenerative diseases and how they affect those we love. Watching the reactions of the crew as their commander becomes worse  is incredibly poignant, even as the hearing finds Kirk incapable of command.

This move causes Commodore Stocker (Charles Drake) taking over command of the Enterprise.

When I was a kid, the underlying themes didn’t reach me, all I saw was my heroes being reduced in size and ability, and I think this was the first point that I realised how growing old can affect one’s abilities.

This one plays more to the cerebral side of Star Trek, telling a science story. There aren’t a lot in the way of action beats (until the final act), just discussions, research, and commentary, and even when I was a young kid, this one entertained. Watching it again now, I find it really enjoyable, even as McCoy becomes more and more irascible.

In the end Kirk is willing to sacrifice himself for his ship, risking an experimental shot in an effort to resume command and save the Enterprise from Stocker’s command and a Romulan attack.

A very enjoyable episode, and makes a great callback to the Corbomite Maneuver. 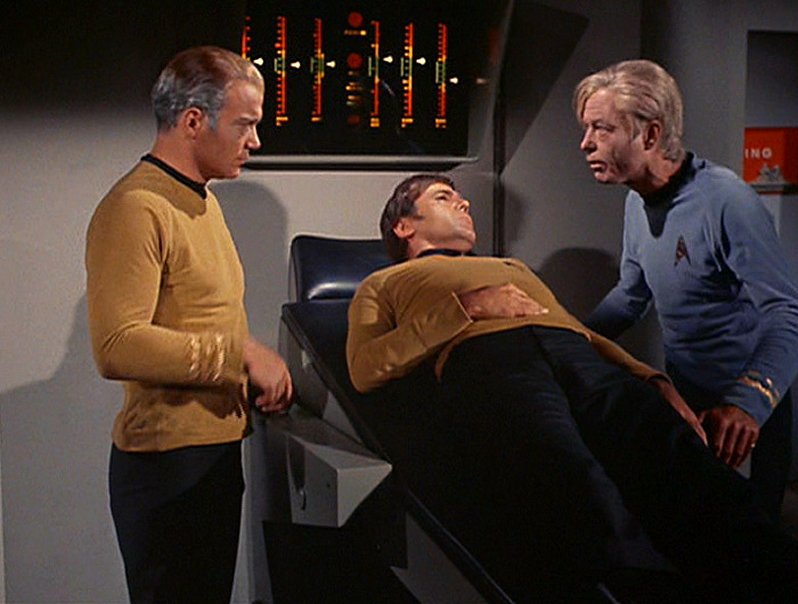 Art Wallace penned this script which aired 15 December, 1967. We get a bit of a glimpse into Kirk’s past with this episode, as we learn about his experiences as a young lieutenant on the U.S.S. Farragut.

An encounter with a strange, cloud-like creature left the young Kirk the sole survivor of a landing party, and now it seems they’ve come across the creature again. Kirk picks up the entity’s distinctive scent while he and Spock, a number of expendable red shirts during an away mission. A mission that ends with the security forces dead, and Kirk realising that the creature that eluded him eleven years ago is back.

And this time he is determined to get it.

He is joined by Ensign Garrovick (Stephen Brooks) who has his own score to settle with the creature, but as the red shirts keep piling up, Kirk, Spock, and MCoy have to wonder about the captain’s obsession with the creature.

This is a great episode as Kirk gets pushed further and further, and McCoy and Spock rely on one another to try to figure out what is going on with their friend and captain. As they pursue it across the reaches of space, things turn worse, when the creature finds a way aboard the ship!

As the final act plays out, Kirk proves himself right, and Garrovick makes the ultimate sacrifice for his ship.

Everything about it makes for a solid story, the performances, the narrative, and of course our characters.

I remember the first time I saw this one, and it fueled afternoons of play as I sat there, engrossed by the episode.

It’s still curious to see Kirk’s obsession with destroying the creature, despite his commitment to discovering new life. Yes, the first encounter with the creature eleven years ago nearly wiped out all of the Farragut’s crew, and its fascinating to watch Kirk weigh his personal vengeance against his obligations as captain, not to mention Starfleet’s mandate.

The story plays out similarly to Melville’s Moby Dick, except for the fact that our heroes have to live to come back next week. Of course, I didn’t know about the similarities when I first watched the episode, now, of course, it’s obvious.

These episodes are great, and next week, the Human Adventure continues to boldly go…